Civil rights pioneer Rosa Parks is suing an Atlanta rap group that named a song after her because she objects to the group’s “vulgarity and profanity,” the AP reports. But Joseph Beck, a lawyer for the group OutKast says the band is protected by the First Amendment and that Parks has no case. Parks’ authorization was not needed for the group to title their song “Rosa Parks,” which appears on the band’s “Aquemini” album, Beck argued. OutKast said their Grammy-nominated song was a tribute to Parks. Nevertheless, Parks, 87, who filed the lawsuit in April in an Ann Arbor, Mich., court, wants an injunction prohibiting further sales of the record. She is seeking $25,000 in damages, according to the suit. U.S. District Judge Barbara Hackett is expected to rule within a week. Rosa Parks is credited with sparking the Montgomery bus boycott led by the Rev. Martin Luther King Jr. after she refused to give up her seat to a white man on a bus in 1955. 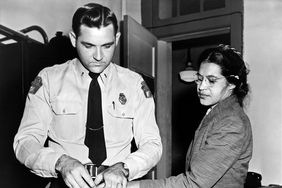 Professor Hart Suggests Which Men and Women Have Changed World History: Any Arguments?