President Bush, members of Congress and members of the American public paid tribute to Rosa Parks under the soaring dome of the Capitol Rotunda on Sunday, honoring the woman whose defiant act on a Montgomery, Ala., bus inspired the civil rights movement half a century ago.

Parks, a former seamstress, became the first woman to lie in honor in the Rotunda, sharing an honor bestowed upon Abraham Lincoln, John F. Kennedy and other U.S. leaders. Although the current president, who was accompanied at the service by Mrs. Bush, did not speak, he did lay a wreath by Parks’s casket, as members of a university choir sang “The Battle Hymn of the Republic.”

Outside the Capitol, as flags flew at half-staff, thousands of people awaited the chance to pay their respects, some arriving before noon. Some carried signs that read, “Thank you, Rosa Parks.”

In a service held earlier Sunday in Montgomery for Parks, 92, who died in her home in Detroit last Monday, Secretary of State Condoleezza Rice paid tribute to the national icon, the Associated Press reports.

Rice said that she and others who grew up in Alabama during the height of Parks’s activism might not have realized her impact on their lives, “but I can honestly say that without Mrs. Parks, I probably would not be standing here today as secretary of state.”

Parks was arrested in 1955 after refusing to surrender her bus seat to a white man. Her minister, the Rev. Martin Luther King, in turn, led a 381-day black boycott of the city’s bus system that helped initiate the U.S. civil rights movement of the 1950s and 1960s.

Rep. John Conyers, a Michigan Democrat, in whose Detroit congressional office Parks worked, said the ceremony and public viewing showed “the legacy of Rosa Parks is more than just a success for the civil rights movement or for African-Americans. It means it’s a national honor.”

Bush: 'The Nation Thanks Rosa Parks' 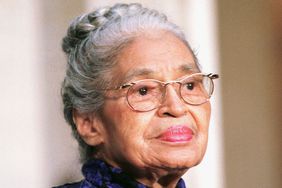