Roger Federer is officially off the singles market. The tennis champ announced on his Web site that he married longtime girlfriend and former WTA tennis player Miroslava “Mirka” Vavrinec in Switzerland on Saturday.

“Earlier today, in my hometown of Basel, surrounded by a small group of close friends and family, Mirka and I got married. It was a beautiful spring day and an incredibly joyous occasion,” Federer, wrote on his blog. “Mr. and Mrs. Roger Federer wish all of you a Happy Easter weekend.”

Last month, Federer, winner of 13 Grand Slam singles titles revealed that he and Mirka are expecting their first child this summer. The couple met while at the 2000 Sydney Olympics where they both represented Switzerland.
– Antoinette Y. Coulton 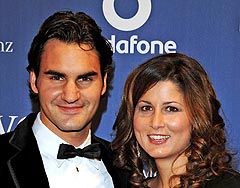 It's Twin Girls for Roger Federer