Basketball star Dennis Rodman and his ex-wife, former “Baywatch” actress Carmen Electra, were arrested on battery charges in Miami Beach, Fla., on Friday, according to the Associated Press. Both were charged with misdemeanors following an altercation in a hotel and were released on $2,500 bail. Rodman, who is in Miami filming “Cut Away,” married Electra in November of last year in Las Vegas but the marriage was a short and reportedly stormy one (Electra filed for divorce in April). A judge ordered the couple stay at least 500 feet away from each other. “It’s one of those situations,” Rodman told reporters, as he left the courthouse. Their lawyer, Roy Black, said: “They both told me that this is a misunderstanding between the two of them. Neither wants to press charges.” 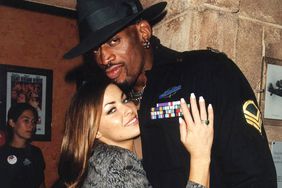