Robert Pattinson: 'I'm Not Interested in Selling My Personal Life'

Hundreds of fans lined up overnight to see the star arrive at the Good Morning America studios on Wednesday, but those hoping to hear Pattinson, 26, pour out his broken heart over his long-term girlfriend Kristen Stewart cheating on him with her Snow White and the Huntsman director Rupert Sanders might have walked away somewhat frustrated – and yet still enlightened.

Referring to the cheating scandal as the elephant in the room that could not be avoided, GMA co-anchor George Stephanopoulos pressed Pattinson on the subject, with the actor refusing the bait for as long as he possibly could. (He did, however, take one thing from the anchor: his his favorite cereal, Cinnamon Toast Crunch, which Stephanopoulos presented to him at the top of the interview.)

“I’ve never been interested in selling my personal life,” said Pattinson, who said he was there to promote his new movie, Cosmopolis, which opens Friday. Still, the actor acknowledged that his being on TV made him a target for personal questions.

“Is there any way to get used to this?” Stephanopoulos asked him, nodding to the screaming fans outside the studio window.

“If you start getting used to this, it means you’re going crazy,” Pattinson said. Not that he was completely knocking the attention.

“It’s nice,” Pattinson admitted. “It’s like being on the craziest theme-park ride you’ve been on. It’s totally exciting, but eventually you need a break.”

Before abandoning the personal questions, Stephanopoulos said, “You seem to be doing okay.”

Similarly tight-lipped while appearing as a guest The Daily Show Monday, Pattinson carefully skirted any talk of his relationship troubles during a chat with Jon Stewart, though he did acknowledge during the taping that for young people going through a breakup sometimes feels like the end of the world. 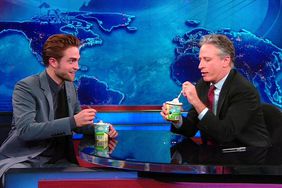 What We Learned About Robert Pattinson This Week

Zoë Kravitz, Jason Momoa Attended 'The' 'Batman' 'After the Afterparty': Inside the 'Super Late Night'