After an eight-year separation, the actor and wife Deborah Falconer file for divorce

Robert Downey Jr. and his estranged wife, actress-model Deborah Falconer, are officially ending their 12-year marriage, his spokesman has confirmed.

The announcement follows Monday’s news that Halle Berry had filed for divorce from her husband, R&B singer Eric Benet, after three years of marriage.

In the case of Downey and Falconer, both 39, the two have been separated for eight years. The two had married after a 42-day courtship in 1992, the same year he delivered his Oscar-nominated role in Chaplin.

Financial terms were not disclosed. The Downeys have a child, Indio, 10, with whom the actor has re-established a relationship, according to reports. For a time, Falconer limited the boy’s contact with his father because of Downey’s well-documented drug addiction.

Indio will continue to live with his mother, but Downey “remains very involved in the upbringing of his son,” Nierob said.

The actor, meanwhile, is engaged to Susan Levin, whom he met on the set of the 2003 film Gothika, starring Berry. He costarred and Levin served as a producer.

While Downey has had trouble landing roles because of his past behavior, he is now shooting Kiss, Kiss, Bang, Bang with Val Kilmer and Corbin Bernsen (due for release next year), while Levin is producing a remake of House of Wax, to star Paris Hilton.

No wedding date has been set, Nierob said. 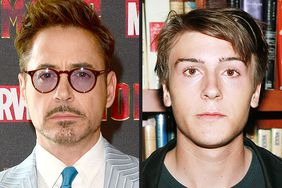 Back from the Edge