Rob Pattinson Jokes He's Homeless, Lives in a Trash Can

The Cosmopolis star, who previously lived with Kristen Stewart, says he's been living behind an archway

Robert Pattinson managed to (mostly) avoid talking about his personal life on Jimmy Kimmel Live! Wednesday – but he did make reference to his rootless living situation.

“Last time you were here, I think you were homeless, right?” Kimmel asked the star, who has been on a publicity tour to promote his new movie Cosmopolis.

Pattinson took a brief pause, nodded and answered, “Still am.”

In July, Pattinson left the home he shared with girlfriend Kristen Stewart after it was revealed she cheated on him with director Rupert Sanders. Pattinson then went to stay at Reese Witherspoon‘s home before reappearing to publicize his film.

Asked if he was living in hotels, Pattinson joked, “No, I rented this archway and I just live behind it… in this big trash can.”

After that, Pattinson made no more reference to his relationship and instead told Kimmel about how he’d spent several months taking up cycling until he realized he’d been biking near a place that was a popular pick up spot for men.

“I used to turn up looking at everyone in the parking lot thinking, ‘Why are all these guys sitting around in their cars all the time?’ And I’m going there every day… in my little Lycra [bike] pants,” Pattinson said. “And one day there was a big raid as I was there.” 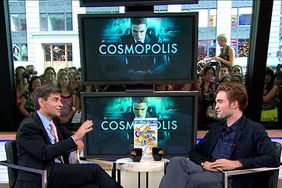 Robert Pattinson: 'I'm Not Interested in Selling My Personal Life'