Why Rita Wilson Always Has Whiskey On-Hand When She Performs (Hint: It's for Her Voice)

With the release of her self-titled second album, an upcoming tour with the band Chicago, and a recent performance on The Kate, Rita Wilson is really enjoying the second act in her career that pursuing music has given her.

In March, actress and producer released Rita Wilson, an album that consists entirely of songs she co-wrote. Now, she’s taking her music on the road with a tour, which she says he has always been a dream of hers.

“Sometimes you’ve just gotta pinch yourself and say, ‘I can’t believe I get to do this,'” she says, adding that it feels good whenever she meets people who are also familiar with her first album AM/FM, which was released in 2012.

In the process of touring, Wilson has developed a few rituals for herself and with her band. Before every show, she and the band form a circle holding hands that always ends with a funny cheer to get everyone in a good mood.

Also, the Good Wife and Girls actress always has a few “very, very” small bottles of Maker’s Mark on hand just in case she needs them for her voice.

“My voice teacher once said it’s not a bad idea to have a shot of whiskey because it’s very dry and if you’re feeling like you’re a little hoarse, one little shot of whiskey can help,” she says.

Wilson recently brought her music to The Kate, a new national music series that’s inspired by the legacy of Katharine Hepburn. There, she performed covers of “Please Come to Boston” and “Wichita Lineman,” which were featured on AM/FM, and “Girls Night In” and “I’m Guilty” from her latest album.

“I loved it,” she says. “It was just very intimate and you really sensed the connection with people who and listen to music all the time.”

Wilson’s full-hour performance on The Kate will premiere Saturday at thekate.tv. It also airs on public television stations around the country – check thekate.tv for local listings. 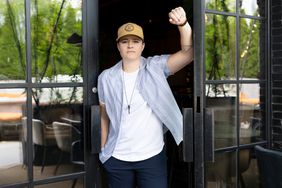 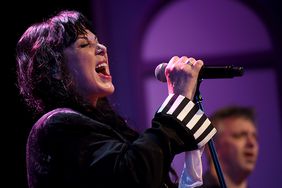