Who Run the World? These Girls! 8 U.S. Olympic Newcomers to Keep Your Eye On

The 19-year-old athletic dynamo, who has garnered the nickname "the Michael Jordan of gymnastics," has dominated her sport ever since she began competing at the senior level in 2013. Biles has since won 11 national titles in total, and most recently became the first woman in 40 years to win four U.S. all-around titles in a row. "She is paving a whole new way for gymnastics," former gymnast and friend, Shawn Johnson East, tells PEOPLE of Biles. "The skills she throws are some of the hardest ones we've ever seen in women's gymnastics. A lot you've never seen done before."

McLaughlin is not only a two-time Gatorade Girls Track & Field Athlete of the Year, but she has also broken a 32-year-old national prep record set by former U.S. Olympian Leslie Maxie in 1984 – oh, and did we mention she's only 16? The New Jersey native has already made history by being the youngest American athlete to compete in an Olympics since 1972.

Better known as "The Human Emoji" – a nickname given to the 16-year-old for her animated expressions while performing – Hernandez is not only one of the youngest Team U.S.A. athletes to compete in Rio, she's also the first Latina gymnast on its gymnastics team since 2004. "I started off doing dance and ballet, [but] it was pretty boring," Hernandez told Teen Vogue. "Then I remember watching gymnastics on TV and telling my mom I wanted to do [that], and she put me right in."

The Olympic fencer is making history at the 2016 Olympics as the first U.S. woman to compete wearing a hijab at the summer Games. The five-time Senior World team medalist tells PEOPLE she's looking forward to competing as well as raising awareness to those tuning in. "I want people to see Muslims in a positive light. I want people to see Muslim women in a way that they're not used to seeing us," Muhammad, 30, tells PEOPLE. "If I can change the thought process of just one little girl, for me, I feel accomplished. On a larger scale if I can reach a lot of people, that's a beautiful thing."

After missing the opportunity to compete in the 2012 Summer Olympics in London, the 21-year-old American diver is getting a second chance to shine at this summer's Games, where she will be competing in the 3-meter springboard competition. "To come that close is way worse than missing by a bunch," Cook recalls of not placing on Team U.S.A. back in 2012. "I've got a video on my phone, this summary of the event, and I watch it as motivation on those days I don't want to practice or I'm losing sight of my goals. It's a tough process to go through, but if you use it the right way there's a chance it'll all make sense in the end."

With a "highly lucrative" Nike deal under her belt, Cunningham – a high jumper – scored the world indoor title with a jump of 6 ft., 5 in.. The 18-year-old's father and coach, former NFL star quarterback Randall Cunningham, describes the Olympian as a "long-limbed gazelle" at the bar.

As the second-youngest Olympian in the history of U.S. women's soccer, Pugh has a long list of accolades listed on her résumé, but the attention the Colorado native has been receiving is still foreign to the 18-year-old. "Even after a game, she'll come back and you'll ask her about [certain plays] and she's like, 'Oh, I don't remember doing that,' " her father Horace Pugh reveals to The Denver Post. "It's not standoffish. Her thing is, 'I don't understand what the big deal is. I like to play soccer. I'm halfway decent at it.' She never likes to say she's good at it."

The 25-year-old wrestler is determined to make Olympics history by being the first U.S. athlete to win a gold medal in women's wrestling. It's been a long time coming for Gray, who began dabbling in the sport at 6 years old with coaching help from her father, a former SWAT officer. "It was just really fun to have something that your dad got to teach you," says Gray. "It's something that I use to this day, those base moves that I learned as a child. I use them at an Olympic level and they have helped me win world titles." 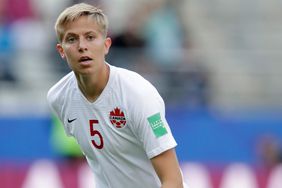 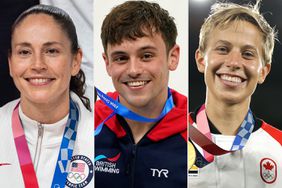