"Crawling out of that wreckage was a victory," he tells PEOPLE of drugs, death and divorce

On an emotional night dedicated to his father, Sambora opened up to PEOPLE about how he barely survived last year – the toughest of his life. “I got divorced [from Heather Locklear], I was going through a custody battle, I was having alcohol addiction problems, my dad was dying,” Sambora, 48, said before taking the stage with Bon Jovi for a benefit concert at Manhattan’s Hammerstein Ballroom Tuesday. The yearlong “Stand Up For A Cure” concert series will raise money for lung cancer research at Memorial Sloan-Kettering Cancer Center, where Sambora’s father, Adam Sambora, was cared for at the end of his life.

Sambora says of his recent experiences, “It was a gang tackle from hell, basically. And crawling out of that wreckage was a very triumphant victory.”

In September, Sambora checked into Utah’s Cirque Lodge for a week, overlapping with Lindsay Lohan. A major contribution to Sambora’s recovery is thanks to the unwavering support of his friends, his band (who rocked the house Tuesday with their version of the Beatles’ “With a Little Help From My Friends”), and, he says: “Oh man, my mom, especially.”

Sambora, an only child, is particularly close to his mother, Joan, as he was with his father, Adam, who suffered from lung cancer before dying of the disease last year. “You feel like you are drowning in a sea of disaster,” Sambora says of dealing with lung cancer.

Helping to raise awareness of lung cancer is one of the best things in Sambora’s life since getting sober, as is taking care of his mom and spending time with 10-year-old daughter, Ava.

“I love being a dad,” says the musician. “I’d have more kids if I could. I’d take a couple more, one or two more before I croak.”

Single since splitting from former girlfriend Denise Richards in 2007, is Sambora thinking of anyone special of having them with? “There’s a couple,” he says with a laugh, “but I don’t want to say anything right now.” 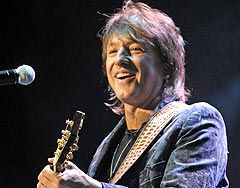 Richie Sambora: "I love being a dad"

Richie Sambora Says He 'Did Detox' for Alcohol 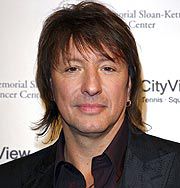