Moss and Doherty didn't marry in a Buddhist ceremony on New Year's Day, her rep says

Despite reports, Kate Moss and Pete Doherty did not marry in a Buddhist ceremony in Thailand, according to her publicist.

“Contrary to various entirely false media reports today, there has not been any kind of marriage ceremony in Thailand. She is on holiday,” her spokesman, Stuart Higgins, said in a statement Tuesday.

Britain’s Sun and Daily Mirror had reported that the model, 32, and the Babyshambles frontman, 27, tied the knot in a candlelit ceremony on New Year’s Day in the Thai resort of Phuket.

Moss was spotted driving a Jeep in Phuket late last week and Doherty arrived in the country over the weekend. A source tells PEOPLE that on Monday the couple sent text messages to pals in Britain wishing them a happy New Year, but did not mention a wedding.

Since meeting at her birthday party in January 2005, the couple have had a turbulent relationship marked by Doherty’s repeated arrests for drug possession and Moss’s rehab stint after photographs were published of her snorting a white powder in a London recording studio.

Rumors of the couple marrying have circulated for months. In October, they were seen browsing at a jewelry shop in Italy, and the following week Doherty was stopped by fans in a London street and asked if he would wed Moss. “Yeah, soon,” he replied. 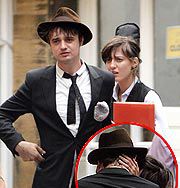 Kate Moss to Speak to Police