Doth the rep protest too much?

In the wake of Entertainment Weekly‘s having speculated Wednesday that Joaquin Phoenix – with the aid of his brother-in-law, Casey Affleck – was performing an elaborate ruse regarding his transition from Oscar-nominated actor to falling-off-the-stage rapper, Affleck’s rep said this career switch is no hoax at all.

In a statement to PEOPLE on Thursday, the spokeswoman said, “I believe the transition from one career to another is never smooth. Unfortunately, Joaquin has had to make this transition in the spotlight of fame.”

She added, “He comes from a musical family and won a Golden Globe and an Emmy for his portrayal of Johnny Cash. He intends to explore his musical interests despite speculative, negative or positive reactions.”

As for Affleck, who has been filming Phoenix around L.A., his rep says, “Casey intends to document this transition and hopes to create an unprecedented, intimate portrait of a very private yet famous person.”

Do you believe it? 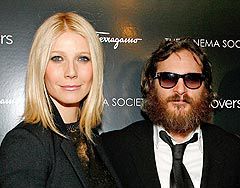 Gwyneth Paltrow Suggests a Trip to the Projects for Joaquin Phoenix 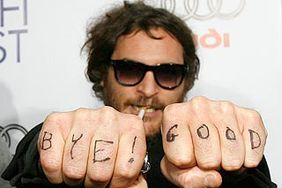