Even more fun than who arrives with whom and who says what in their acceptance speech at the Grammys is who wears what. Some of the looks are pure harmony, while others are just too loud. From Beyonc Knowles's golden gown to Lil' Kim's gaudy getup, check out the stars who struck fashion gold at recent Grammys – and those who struck out.

Beyoncé Knowles was a knockout at the Grammys in 2001, where her group, Destiny's Child, won for best RampB performance by a group or duo for "Say My Name." The singer and actress wore an elegant champagne-colored Versace gown and still looked sexy ... no, make that bootylicious.

Britney Spears's outfit at the Grammys in 2000 was more old-fashioned Hollywood than Frederick's of Hollywood – a bit of a departure for the pop star, who has been known to show her share of skin. Although she lost to Christina Aguilera as best new artist that year, Spears's elegant Randolph Duke gown and glamorous Oscar de la Renta mink stole won major style points.

Pop superstar Celine Dion had a titanic chart hit with "My Heart Will Go On" in 1998, and the diva also made a splash at that year's Grammys in a sleek, sexy ice-blue Halston gown.

Flame-haired Shirley Manson, lead singer of Garbage, is no "Stupid Girl" when it comes to fashion. Seen here at the Grammys in 1999 with her band – nominees for album of the year and best rock album – Manson makes her avant-garde, sheer frock seem demure.

Wearing white after Labor Day used to be a fashion faux pas – but on Gloria Estefan at the Grammy Awards in 1996, it is pure sophistication. The Latin diva turned up the heat in this winter-white gown, and looked even hotter with a Grammy for best tropical Latin performance.

Whoa, Nelly! At the Grammys in 2002, Nelly Furtado (who won for her song "I'm Like a Bird" and was nominated for three other awards) flew down the red carpet in a fluttering, gauzy gown. The Canadian crooner, whom PEOPLE fashion guru Steven Cojocaru calls an "elegant beauty," looked strikingly feminine and fresh in this romantic strapless number.

Soul heiress Natalie Cole's latest album is Ask a Woman Who Knows. And one thing this woman knows is how to dress for the Grammys: Cole was the picture of old-school elegance in a sleek gown at the awards in 2002. Maybe it's all the practice she has had – after all, Cole has won 13 Grammys.

RampB queen Monica isn't into flashy, midriff-baring outfits like her peers. "I like feminine clothes, but not real sexy," the teen told InStyle in July 1999. True to form, Monica strikes just the right balance in a silky pink shift at the Grammys that year, where she won an award for best duo or group RampB performance for her sassy duet with Brandy, "The Boy Is Mine."

In order for Christina Aguilera to wear this Versace chain-mail dress to accept her best new artist award in 2000, the designer had to spend 28 hours fitting it to her form, according to InStyle. Too bad all that hard work was for naught: It may fit well, but this glaring dress clashes terribly with Aguilera's platinum locks and fair complexion.

Faith Hill, a triple Grammy winner in 2001, opted for comfort that year, sporting in a coral Versace dress and black shrug. "Nothing falling off, (nothing) falling out," she told PEOPLE that March about her ensemble. That's one way to put it. Another could be, "Nothing fitting well, nothing looking chic."

Hip-hop diva Lil' Kim proves at the Grammys in 1998 that all that glitters isn't gold. From her bejeweled purse and matching shoes to her sparkly diamond necklace and beaded undies, the rapper didn't miss a detail. Except, um, a skirt.

Eccentric Macy Gray beat Madonna and Christina Aguilera for the best female pop vocal performance award in 2001 (for her song "I Try"). So why did the 5'11" soul singer wear a sloppy-looking, shredded fur coat to her first-ever Grammys ceremony? Beats us. The coat's one redeeming quality? It conceals the jeans and T-shirt Gray is wearing underneath.

"I wanted to be in gold tonight," Shakira told PEOPLE in March 2001. She certainly got her wish – from her hair to her tattered Maria Vazquez gown down to her boots. Really, Shakira – all the gold you needed is in her hand: your best Latin pop album trophy.

Shelby Lynne was such a hot commodity that she landed a record deal in 1999 as soon as she arrived in Nashville, the Washington Post noted in November 2001. Unfortunately, she didn't look too hot that year at the Grammys, in a too-tight two-piece outfit. Oh, well, her best new artist Grammy surely kept her warm that night.

In 2001, singer Toni Braxton left little to the imagination in this skimpy Richard Tyler number. Braxton's barely-there gown certainly had onlookers talking – and asking themselves, "What was she thinking?" Luckily, her award for best RampB female vocal performance is a no-fail accessory. 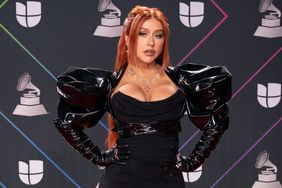