A family member has confirmed that a body found in the search for a missing Sarasota, Florida, father and his three teen children is that of 17-year-old Rebecca Kimberly.

The family, who had reportedly been living on a sailboat in Sarasota for a year, has been identified as Ace Kimberly, 45, Roger, 13, Donny, 15, and Rebecca, according to the U.S. Coast Guard. They were last seen Sunday on a 29-foot sailboat off of Florida’s Gulf Coast.

The aunt of the missing children, Sadie Dilts, told Today, “They hadn’t heard from them since Sunday, so then I kind of figured that it wasn’t good. Feels like I’ve lost one of my own kids.”

Ace had been raising the three children ever since their mother, Pauline Solsberry, divorced him nine years ago. She has been estranged from her children since the split, but kept in touch through a niece and photos.

“They seemed to be happy,” Solsberry said, according to WTSP News 10.

“Even though I don’t like the man, I hoped he would be taking care of his children and keep them safe no matter what happened,” she said.

“I want my children,” she continued, adding that she hopes they can hear her message: “That I love them hope they re safe to be safe. I don t care if they ever want to see me just be safe .even if you don t want to see me be safe and come home.”

Captain Greg Case of the U.S. Coast Guard announced in a press conference late Wednesday, “It’s with a heavy heart that I announce that at about 4:30 this afternoon one of our coast guard helicopters located a deceased person in the search area.”

Crews continue to search for the remaining three missing persons.

The sailboat has not yet been located, but the Coast Guard announced that debris – including a tarp, six life jackets, water bottles, two kayaks the boat was towing and a propane tank – was found 33 miles into the Gulf of Mexico from Sanibel Island on Wednesday.

The Coast Guard began searching for the missing family on Tuesday, after watchstanders received a report the same day stating that the man and his three kids left from Sarasota at 7 a.m. on Sunday headed to Fort Myers to repair a sailboat.

At 3 p.m. on Sunday, Ace called his brother and said his vessel was “in 6-foot seas and he was attempting to survive with his children,” the Coast Guard said in a statement.

At this time, mariners are asked to keep a lookout and contact Coast Guard Sector St. Petersburg at 727-824-7506 with any further information on the missing family.

The search efforts comes almost one year after two Florida teens went missing at sea on July 24. Perry Cohen and Austin Stephanos, both 14, set out from Florida’s Jupiter Inlet on a boating excursion and never returned.

A statement on the official Facebook page for the Perry J. Cohen Foundation reads: “The Perry J. Cohen Foundation is praying for the safe return of the Kimberly family from Sarasota FL. Our hearts and prayers go out to the family, their loved ones and the dedicated men and woman of the United States Coast Guard and Law Enforcement who are conducting the SAR efforts.” 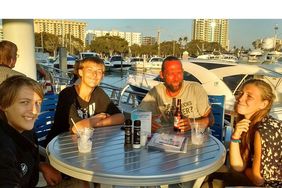