Rebecca Black Takes Back the Internet from Charlie Sheen

Tiger Blood is, like, so last week. Right now, the Internet is all about “Friday.”

Singer Rebecca Black has single-handedly taken the Web back from the embattled Charlie Sheen by pushing 12 million (and counting) YouTube views for her debut video, “Friday.”

However, the attention isn’t exactly positive for the 13-year-old aspiring pop star, who has been a trending topic on Twitter for almost a week.

Her video was discussed on Tosh.0, Comedy Central’s blog for comic Daniel Tosh’s Web-themed show, proclaiming “Songwriting Isn’t for Everyone.” From there, the video spread quickly, being dubbed the "worst music video ever" by Gawker.com.

The blogs have a point. One example of the lyrics: “Tomorrow is Saturday/And Sunday comes afterwards.”

Plus, Black’s dramatic dilemma in the video focuses on which seat to take in a car. Why is a 13-year-old driving that car? Why aren’t they wearing seatbelts? And why is an adult rapper following them?

Black also has a distinctive way of pronouncing “Friday” that some say sounds like “Fried Egg.”

All those factors have fueled the fastest-spreading Web sensation since Sheen’s rants, with acoustic covers, banjo covers – even a faux Bob Dylan cover! – of the pop song hitting YouTube.

The song is the product of Ark Music Factory, an L.A.-based vanity production company that matches aspiring teen singers with producers and songwriters – for a price, of course. 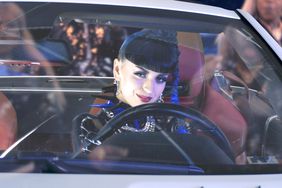