Tell us if these drama queens (and kings!) – Ali Fedotowsky! Snooki! the Kardashians! – drum up the drama just for the cameras

Ali Fedotowsky's season of The Bachelorette was the most dramatic ever! Superlatives aside, she had plenty of surprises, including front-runner Frank's sudden realization that he was still in love with an ex – which had him traveling to all the way to a Tahiti beach to tell Fedotowsky himself.

Did she or didn't she? When rumors started up about Kim Zolciak and female deejay Tracy Young, the Real Housewives of Atlanta star told PEOPLE the pair were just friends. When her show returned for its third season, Kim admitted to a tabloid that she had slept with Young. Kim is now expecting a baby – with a man.

Drinking, clubbing, drinking while clubbing and even getting arrested are nothing new on the Jersey Shore. But when Nicole "Snooki" Polizzi was handcuffed barefoot on the beach in Seaside Heights, she was charged with public drunkenness – and being a "public nuisance." Though she vowed to cut back on her alcohol intake, she was at it again before long during a trip to L.A.

When Real Housewives of New York City's Kelly Bensimon said that Bethenny Frankel "tried to kill me so many times" during a Virgin Islands dinner party, her costars became concerned. In the end, the dramatic breakdown – which she called a – ended with jellybeans.

After eloping in Mexico, The Hills couple made it official in a season 4 episode of their show. Then came the split, followed by divorce papers. Before long, they reconciled and sealed their love (supposedly for real) by renewing their vows.

In an episode that aired in January, original Real Housewife Vicki Gunvalson left the drama of Orange County behind and took her husband Donn to Turks and Caicos, where they tearfully renewed their vows. This blessed event came just one season after Vicki notoriously claimed to Donn that her "love tank" was empty – and months before she filed for divorce.

The Hills has long been criticized for scripting the drama, despite the show's insistence otherwise. So when the series finale ended on a Hollywood soundstage, it suggested that the hookups, backstabbing and mascara-stained tears had all been a big setup for viewers. But, could the show's Hollywood ending be the only part that was faked? 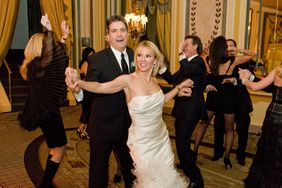