And now for something a little different. The Razzies — honoring the worst in movies — were dispensed in L.A. on Saturday night. The, er, big winner was “The Wild, Wild West,” which took home five Razzies, for being the worst picture and for having the worst director (Barry Sonnenfeld), the worst screenplay, the worst song and the worst new screen couple, Kevin Kline and Will Smith. The coveted worst actor title went to “Big Daddy” star Adam Sandler for his role as an “amazingly idiotic adoptive father.” Worst actress was “The Blair Witch Project” star Heather Donohue. Sylvester Stallone and Madonna took top honors as the worst actors of the last century. The worst picture of the last decade was “Showgirls.” And the worst new star was Pauly Shore. 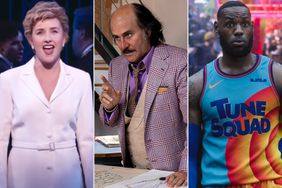