Ray J Is Putting Cheating, Groupies and Kim Kardashian Behind Him: 'I'm Ready for the Next Chapter'

"I had my fun and I survived. A lot of people don't survive and they get caught up in it," the singer tells PEOPLE exclusively

Over the years, Ray J has made headlines for his rocky relationship with Princess Love, starring in a sex tape with Kim Kardashian and getting into booze-fueled fights.

But now that he’s a married man, the singer is ready to put all the drama behind him and have a fresh start with his wife.

“The main thing for me is just her being happy,” the star tells PEOPLE exclusively. “I had my fun and I survived it. A lot of people don’t survive. They get caught up in it.”

Admitting he’s always been “a little bitty cheater” in the past, Ray J, 35, says he’s now “ready for the next chapter in life.”

“There were so many people pulling us,” he says. “Now I don’t really think about sex and groupies. I used to turn up all day and love it and own it.”

Giving up alcohol nine months ago, Ray J now shuns the club life for nights in with home-made cooking and a lot of Netflix.

“I decided to just change up for her and it’s been great,” he says of giving up alcohol. “It’s been a 360-degree turnaround without the alcohol. I changed up my environment and started to become the person that I felt was the best me I could be.”

For all the details on Ray J and Princess Love’s fairytale wedding, pick up the latest issue of PEOPLE, on newsstands Friday.

The star is focused on his company, Raytroniks, and is looking forward to starting a family with Princess Love, 31 – and putting his relationship with ex-girlfriend Kardashian West squarely in the past.

“I just hope people could just kind of move on,” he says of the infamous relationship. “I hope people can see a lot more substance. Fans are starting to come back and appreciate the good work I do instead of the dirty work. I’m at a peaceful place.”

And when it comes to raising a family, the newlyweds are looking to do it outside of the Hollywood glare.

“I want to go to Austin ’cause that’s where Princess grew up,” says Ray J. “I know what it’s like to grow up in Hollywood … being a kid in Hollywood getting swallowed up in all these things. I want them to have a chill life and understand what that is. I’m ready for that.” 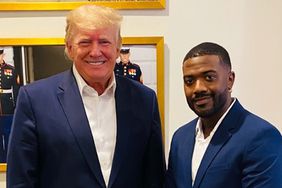