Rapper 50 Cent Files a $20 Million Lawsuit against His Ex

Rapper 50 Cent served his former girlfriend, Shaniqua Tompkins, with a $20 million defamation lawsuit on Friday outside a Suffolk County, N.Y., court, for allegedly making offensive and false statements about the hip-hop star.

Following a fire on May 30 which burned down a Long Island home owned by 50 Cent (real name: Curtis Jackson) – in which Tompkins was living with their 11-year-old son, Marquise – Tompkins made defamatory statements, according to Jackson’s court documents, accusing him of “trying to kill” her and their son by setting the fire.

“It’s simply not true,” Jackson’s attorney, Brett Kimmel, told PEOPLE. 50 Cent was in Louisiana filming the movie Microwave Park with Sharon Stone at the time of the blaze.

Despite the defamation suit, Tompkins – who on Friday was granted a temporary order of protection against Jackson by the judge – repeated the sentiments for which she’s being sued to PEOPLE outside the Long Island courtroom.

“He always threatened me,” said Tompkins, who filed suit against 50 Cent earlier this year, alleging he promised her the house – valued at $2.4 million – over a decade ago. “If someone threatens you on Monday and you jump out of a second floor window on Friday, that’s the facts, you decide.”

50 Cent’s attorney also filed a visitation petition alleging that since the fire, Tompkins has been deliberately preventing the rapper from seeing his son in part by not revealing their new place of residence, in direct violation of a court order from last June.

“She s completely cut him off from his son,” says Kimmel. “The trouble in the relationship is driven by the anger and hostility that s coming from her.”

But Tompkins says she won’t reveal where she and Marquise are staying to Jackson because the fire “was a threat on my life. This is my child’s life. This is our lives.”

Both Tompkins and Jackson – who was in Canada during the June 20th proceedings – are due in court the morning of July 17 for another hearing. In the meantime, though local fire department officials have deemed the house fire “suspicious,” they have not yet ruled it arson, and an investigation is ongoing. 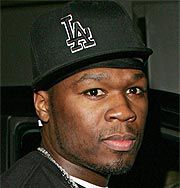