Who better than Randy Jackson to judge Arnel Pineda, the controversial choice for new lead singer of the legendary rock band Journey?

Not only is Jackson a judge on American Idol, but for two years he also played bass for Journey.

His verdict on Pineda, who has come from relative obscurity to fill the formidable shoes of former frontman Steve Perry? A big thumbs up – with a footnote.

“The guy can sing, he’s great,” says Jackson. “But no one … no one will ever be Steve Perry. He’s one of the greatest singers to ever grace the microphone.”

Pineda’s rise is one of rock’s great Cinderella stories. The Journey-loving Filipino – who grew up poor in Manila and was homeless for two years before turning professional singer – was playing cover tunes with a local band when Journey founder Neal Schon ran across extensive live-club footage of Pineda’s performances on YouTube.

Because Pineda’s YouTube rendition of Journey’s “Faithfully” had developed an Internet cult following (given how closely it resembled Perry’s own version of the classic), Schon flew in Pineda for a tryout. The singer then joined the band in time for a three-disc album, Revelation, and an international concert tour.

Jackson visited the studio during work on the album. “I heard a few songs,” says Jackson. “I think they’re doing really well.”

As for ex-Journeyman Perry, “He’s doing his thing,” says Jackson. “Steve’s fine. I actually had lunch with him about a month ago. He’s working on hot stuff, too.” 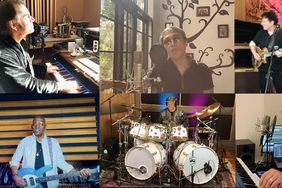