Although they remain suspects in their daughter’s Dec. 26, 1996, slaying, John and Patsy Ramsey have decided to write a book about JonBenet’s unsolved death, the Associated Press reports. Tentatively titled “The Death of Innocence,” the book will focus on the 6-year-old’s life beyond beauty pageants and the Ramseys’ faith in God, said Rolf Zettersen of Thomas Nelson Publishers, a religious-theme publishing house that is producing the book. In a statement through Thomas Nelson, the Ramseys said, “We have patiently waited for the justice process to evolve in the matter of our daughter’s death. We have remained silent while baseless and slanderous accusations about our family were made by the frenzied media. With the grand jury’s recent decision (not to indict anyone), the time is appropriate to recount our experiences in this tragedy.” JonBenet was found strangled and had a fractured skull in the basement of the family’s Boulder, Colo., home hours after her parents reported finding a ransom note in the home. The Ramseys now live near Atlanta. The book is scheduled for a March release. 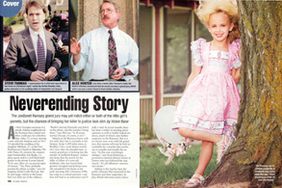