Better Than a Crown: Check Out All of Queen Elizabeth's Best Scarf Moments

And yes, she ties them herself!

In 2012, the Queen gave her country outfit a decidedly feminine twist when she wore a light pink scarf and pearls.

She wore a white and blue silk scarf when she attended the Windsor Horse Show (and won a Tesco gift card) in May.

In 1989, the Queen wore a bold purple number that was held securely in place by bobby pins.

She paired her pink cape with a pink and purple scarf when she attended the Windsor Horse Show in 1979.

In 1988, the Queen looked very smart in riding pants, a tweed jacket and a colorful green scarf.

In May, the Queen wore a white, pink and light purple painted silk scarf at the Windsor Horse Show.

The Queen protected her yellow scarf from the rain in 2013 when she attended the Royal Windsor Horse Show.

In 2015, she wore a sky blue number to compliment her quilted navy blue jacket.

In 2009, the Queen demonstrated her beautiful scarf-tying skills when she glanced up at the sky while wearing a navy number. 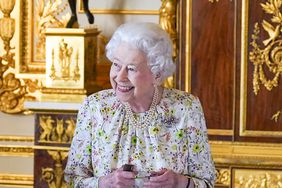