A protester interrupted a panel with Ashton Kutcher at the Airbnb Open 2016: A Festival of Hosting event in Los Angeles on Saturday.

During Kutcher’s presentation, a woman named Ariel Gold went onstage in the to protest Airbnb in Palestine.

Gold is a member of CODEPINK, a women-led grassroots organization supporting peace and human rights initiatives, according to the group’s website.

Kutcher, 38, alongside Airbnb founder Brian Chesky, took time to address the matter and defend the company, which the actor has invested in. He started by talking about his dream for a harmonious world.

“[A world] doesn’t discriminate against one another,” he said in a video captured by one attendee. “We can get to know each other intimately and understand our collective narrative is a narrative for everyone, and that we all can belong in a world together without borders.”

He went on to talk about achieving such a goal.

Kutcher then turned to Chesky, and defended his friend’s mission and company.

“And I know this man,” he said. “I know his heart, I know his initiative, and I know that when a problem gets brought to his desk, that says that there is a discrimination or this is a displacement, that he cares. And that the first thing that he does is try to look at the system holistically and change it to make it better.”

Kutcher received a lot of support from the crowd, and ended his speech with a message about coming together.

“You’re welcome to a world where we all belong,” he said. “And if you want to sit down and have a conversation about it, I’m happy to have that conversation with you.”

RELATED VIDEO: Ashton Kutcher Talks About Being a Dad – Again: ‘It’s Like Gymnastics Having Children’

Kutcher’s wife Mila Kunis recently spoke out about equality in a powerful essay posted on Kutcher’s website, A Plus.

“There have been moments when I have been insulted, sidelined, paid less, creatively ignored, and otherwise diminished based on my gender,” she said about sexism in the entertainment industry.

She continued: “I taught myself that to succeed as a woman in this industry I had to play by the rules of the boy’s club. But the older I got and the longer I worked in this industry, the more I realized that it’s bulls—! And, worse, that I was complicit in allowing it to happen.” 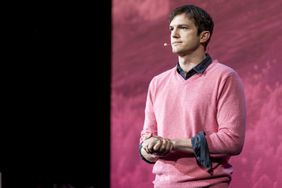 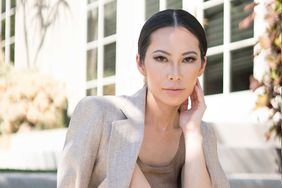