Nearly eight years after their lavish royal wedding, see how the couple went from coeds to newlyweds!

William and Kate's year-long romance goes public when the couple, both 21, are photographed during their Alpine vacation at Switzerland's Klosters ski resort in March 2004. "It would be wrong to read into it that wedding bells are around the corner," a friend of William's tells PEOPLE at the time.

William and Kate display a rare moment of public affection during a soccer game at the prince's alma mater, Eton College, in March 2006. "It was all very sweet," a bystander said of the couple – who have been living separate lives since graduating from University of St. Andrews, with the prince training at Sandhurst military academy and Middleton working in fashion.

Kate cheers on William during his graduation from the Royal Military Academy Sandhurst in December 2006 – in the presence of her boyfriend's grandmother, Queen Elizabeth. It marks the first official royal event for Middleton, setting off a new set of engagement rumors.

Kate only has eyes for William after partying at their favorite hot spot, London nightclub Boujis in South Kensington, in September 2006. A year later, after their surprise split, the pair is photographed on a secret date at Boujis.

Just a month before their brief split, William and Middleton take their PDA to the Swiss Alps during a weeklong ski vacation in the resort town Zermatt in March 2007. Off the slopes, the canoodling couple took to "just being themselves" during evening pub crawls with pals, says one local bar manager, who spotted them "looking very relaxed" during their trip.

In June 2008, a debonair William and Kate go on a charitable double date with Harry and his girlfriend Chelsy Davy at the Boodles Boxing Ball – benefiting the Starlight charity for terminally and seriously ill children – in London.

Following a picnic and polo match later that month, William shows Kate his best moves at the annual Beaufort Polo Club party while ringing in his 26th birthday. "They don't have any inhibitions about being spotted being affectionate," an onlooker tells PEOPLE.

On break from his military training, William enjoys some RampR with Kate on a speedboat at the couple's favorite Caribbean retreat, Mustique, in August 2008. "They looked extremely happy together," an onlooker says of the couple, who spent a week in an ultra-secluded villa.

The prince and Kate show their mutual affection at a charity polo match at Coworth Park, Berkshire, where William and Harry's team raised money for their causes in May 2009. "She was just enjoying the sunshine and the game," a bystander says of Middleton.

At the premiere of Sherlock Holmes in Dec. 2009, the private couple skipped the red carpet hoopla in favor of slipping into a backdoor entrance minutes before showtime at London's Leicester Square.

After seven years together, William and Kate are practically family, with the prince taking his lady-in-waiting on a wild ride during a Middleton family getaway in the French Alps in March. "William was clearly very close to Kate's father," an onlooker notes, "and every time he spoke to him, William replied, 'Yes, Dad.'"

A dashing William and beaming Kate make a rare public appearance together at a friend's Oct. 23 nuptials in Northleach, Gloucestershire, igniting a new round of royal wedding forecasts for the beaming couple. "She looked so happy," an observer tells PEOPLE.

Wearing Princess Diana's sapphire engagement ring, Kate and her prince make an engaging debut as a couple at St. James's Palace in London on Nov. 16, 2010 – just hours after announcing their plans to wed in London in April 2011.

Wearing an Alexander McQueen gown, Kate Middleton, then 29, wows millions of royal watchers worldwide when she makes her entrance into London's Westminster Abbey to exchange vows with her real-life Prince Charming, then 28, on April 29. "Together they will be the King and Queen of the people," Princess Diana's friend, Lana Marks, says of the newly ennobled Duke and Duchess of Cambridge. "This is going to be a great love story."

In April 2018, the couple welcomed Prince Louis, making them a family of five! 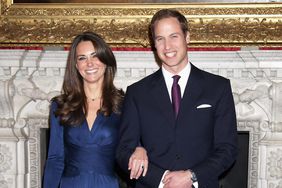