The artist formerly known as Prince donated $37,000 to Princeville, N.C., the flood-ravaged town that coincidentally bears his old name. He contributed the money after reading articles about the devastation wreaked on the town of 2,100 in September by Hurricane Floyd. Sam Knight, Princeville’s zoning officer, told the Associated Press that the money will pay for reconstruction supplies. “Although $37,000 will not go very far when you talk about building supplies, we’re very grateful to him for thinking about us,” Knight said. “Even though you can’t tell it from his music, he’s a very religious man who wanted no publicity about his gift to the town.”

CORRECTION: In the Jan. 7 edition of The Daily, we incorrectly reported the maker of Gwyneth Paltrow’s 1999 Oscar gown. The designer should have been identified as Ralph Lauren. 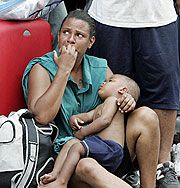