"It's a great relief to see him home in one piece," said his father Prince Charles

Prince Harry returned home from Afghanistan on Saturday, welcomed back by his brother Prince William and his father Prince Charles.

“It’s a great relief to see him home in one piece,” Charles told reporters.

The prince, 23, arrived with around 170 other soldiers at the Royal Air Force Base Brize Norton, in Oxfordshire, 50 miles northwest of London, just before 11:30 a.m. local time.

Fifteen minutes later – carrying his gear and dressed in his desert fatigues – he stepped off the RAF Tristar jet, which returned from the frontline in an overnight flight from Kandahar.

He didn’t glance towards the large number of media crews and press photographers at the base. Inside the terminal, he was reunited with his brother William, 25, and Charles, 59.

Before he took off, Harry spoke candidly of his regret at coming home early, and he said he would relish the chance to prove himself again in battle. As third in line to the British throne, it was feared Harry had become a prime target for Taliban fighters when his involvement in the war was revealed February 28.

“It’s something I would love to do,” he said in a pooled interview. “I don’t want to sit around Windsor, because I generally don’t like England that much and it’s nice to be away from all the press and the papers and all the general s—- that they write.”

It can now be revealed that until Friday night’s flight he had been deployed with a squadron of light tanks in the desert close to the former Taliban stronghold of Musa Qaleh. The British army took control of the area in December.

He was working as a Spartan reconnaissance vehicle commander, in charge of a vehicle team supporting a joint US and Afghan operation to seize control of the village of Kariz de Baba.

After his arrival in England, Harry was seen leaving the terminal building, his his older brother helping him load his bags into the back of an Audi.

At the base, Charles spoke briefly of his pride in his son – and expressed his disappointment that Harry had to come home early.

“I feel particular frustration on his part that he was removed unexpectedly early because, apart from anything else, he had been looking forward to coming back with all the rest of his regiment,” the prince said.

And he spoke about how hard it was keeping the deployment a secret. “It’s been quite difficult also having to keep quiet about the fact he was serving in that part of the world,” he said. “People kept saying to me, ‘You must be so frustrated about Harry not being able to serve abroad.’ I would say he’s on exercise somewhere.”

Charles said he understood “what it’s like for so many families with loved ones serving abroad.”

“I’ve been incredibly proud of Harry and I promise you … equally proud of all the dedicated service given by all our armed forces,” he said.

On Harry’s plane there were some reminders of the horror of war, Charles said.

“With Harry’s own plane coming back just now they had to stop and drop off three badly wounded people who had been blown up by mines, and it brings it home just how hazardous it is, and also people who are being wounded and injured all the time who we don’t hear about,” he said.

And he added, “I also feel very strongly that we don’t often appreciate what the people in the armed forces are doing, putting up with the most impossible conditions, very often in hazardous circumstances in boiling heat or freezing cold, being shot at or rocketed at and goodness knows what else.”

“The fact they do all this with incredible humor and dedication is extraordinary and so we owe them an enormous debt of gratitude for performing their duty in this incredible way,” he said. 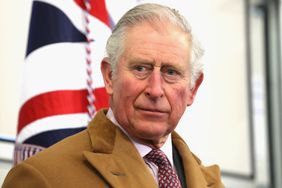 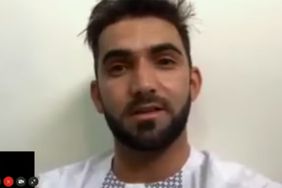 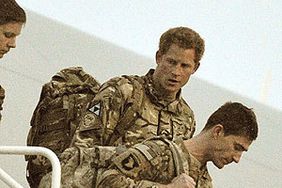