President Oprah? Go For It

It’s getting so that you can’t even consider running for President unless you have a SAG card. So now, joining Warren Beatty and Cybill Shepherd among the ranks of possible Presidential candidates is . . . Oprah. The Associated Press reports that some Minnesota members of the Reform Party (the former launching pad of Ross Perot now being fronted by the controversial Jesse Ventura) are talking up a Winfrey for President campaign and have created a website to draft Oprah in 2000. “It is Jesse Ventura times 100,” said Paul Larsen, chairman of the draft committee and a party leader from suburban Minneapolis. “She’s got a thousand times as much money, 100 times the name recognition. She has a sterling reputation for honesty.” Alas, the queen of talk is not interested, a spokeswoman says. 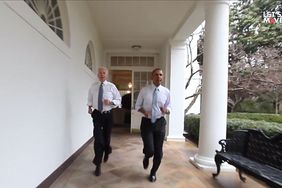 President Obama and Vice President Biden Go for a Jog