Two pregnant Illinois residents have tested positive for the Zika virus, a rare tropical virus spread by mosquitos that is suspected to cause severe birth defects

Two pregnant Illinois residents have tested positive for the Zika virus, a rare tropical virus spread by mosquitos that is suspected to cause severe birth defects.

The two women recently traveled to countries where the virus is found and physicians are monitoring their pregnancies, according to a statement the Illinois Department of Public Health released Tuesday.

“There is virtually no risk to Illinois residents since you cannot contract Zika virus from another person, but only through the bite of an infected mosquito,” said IDPH Director Nirav D. Shah, M.D., J.D. “But since this is a time of year when people travel to warmer climates and countries where Zika virus is found, we are urging residents, especially pregnant women, to take preventive measures when traveling in affected countries and check health travel advisories.”

On Friday, the US Centers for Disease Control and Prevention recommended that pregnant women postpone travel to 14 countries and territories – including Mexico and Brazil – where Zika outbreaks have occurred.

Here’s what you need to know about Zika.

What are the symptoms?

Only about 1 in 5 people infected with the virus experience symptoms, according to the CDC. Symptoms are generally mild, including fever, rash, joint pain and conjunctivitis – and last for about a week. However, the virus has been linked to alarming complications in pregnant women. Researchers say that Zika may cause microcephaly, a rare neurological condition that’s associated with a small head and incomplete brain development in newborns. The link between Zika and microcephaly was strengthened recently when the CDC found the virus in tissue from three malformed fetuses, the New York Times reported. The World Health Organization says that further studies need to be conducted.

How is Zika transmitted?

The virus is transmitted primarily through the bite of an infected Aedes species of mosquito. Researchers are working to determine if it is possible for pregnant women to pass Zika virus to their babies during pregnancy. In rare cases, the virus could be passed from mother to fetus during childbirth and there has been one report of possible spread of the virus through sexual contact.

Where has it spread?

Zika virus has sporadically infected people in Africa and parts of South and Southeast Asia since it wad first described in 1952, resulting in just 14 cases. The virus spread to the Americas in early 2014 and Brazil reported infections in May 2015. Since then, health officials have found the virus in 14 different countries and territories. One case of Zika was confirmed in Houston, Texas, last week and on Friday, the first case of microcephaly linked to the virus was reported in Hawaii. The child’s mother had lived in Brazil in May 2015 and was likely infected by a mosquito then, according to the Hawaii Department of Health. Since 2014, Hawaii has documented six cases of individuals who caught the virus while visiting other countries.

How is it treated?

There is no treatment for Zika virus and doctors mainly focus on alleviating symptoms. The WHO recommends that people traveling to infected areas should exercise the normal precautions against mosquito bites. The CDC recommends pregnant women postpone travel to areas where Zika virus transmission is ongoing. 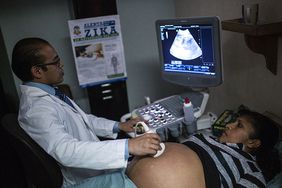