Star Bikini Bumps of the Year!

From Gisele Bündchen to Camila McConaughey, see which moms-to-be made pregnancy look swell in their swimwear

A leopard-print bikini was like second skin to the supermodel, who showed off her growing bump while getting some sun in Miami during her pregnancy with daughter Vivian. For a more camera-ready look, the second-time mom added a stylish straw hat, sunnies and hoop earrings.

Aloha! Before welcoming son Noah in September 2012, the actress revealed her baby bump in a tropical triangle bikini top and breezy white skirt during a vacation with hubby Brian Austin Green in Hawaii.

While expecting son Livingston, the model mom bared her bump in a tiny black bikini and white sarong while on vacation in Ibiza, Spain, with husband Matthew in August 2012.

The Victoria's Secret and Sports Illustrated model (who welcomed son Gavin on Dec. 13, 2012) is known for rocking sexy bikinis – so it's no surprise she celebrated her birthday that year mermaid-like, swimming with her baby bump in view. "I had the best day and spent most of it under water," she wrote on her Facebook page.

Hot mama! During her fourth pregnancy with son Finn, the far from shy reality star sported not one but two revealing swimsuits while vacationing with her family in L.A.

Call it her all-Kourt appeal. From the ocean to romantic beachside strolls, the stylish reality star rocked an entire wardrobe of chic bikinis during her second pregnancy with daughter Penelope. She flaunted her belly in a gorgeous green Cote d’Or two-piece during a birthday trip to the Dominican Republic and, one month earlier, made waves in Mexico in a sexy tie-dyed bikini.

Prior to the July 2012 arrival of her daughter, pregnant Uma looked just beachy in a trio of swimsuits during a March getaway in St. Barts. Soaking up the sun in a sleek black belly-baring bikini, she later switched to one-pieces for setting sail on a luxury yacht – a nautical-inspired striped number and a simple maroon suit for a refreshing dip in the Caribbean.

Before giving birth to daughter India Rose, the Fast Five actress put her belly on display in a sizzling purple two-piece while frolicking on the beach in St. Barts on Jan. 29, 2012. Enjoying a babymoon with husband Chris Hemsworth, she showed off her mom-to-be curves on the sand and even shooting down a water slide.

The Victoria's Secret angel knows how to strike a yummy mummy pose in a tiny two-piece! The 8-months pregnant model mama was aglow with a bikini-clad bump on a Brazilian beach in April 2012, just weeks before the May 7 arrival of her second child, son Noah Phoenix.

Sexy at sunset! While due with son Camden, the mom Tweeted a photo (snapped by hubby Nick) basking with her baby bump in a gorgeous infinity pool. “I've been lucky, knock on wood, so far – no morning sickness, no anything," the TV host said. 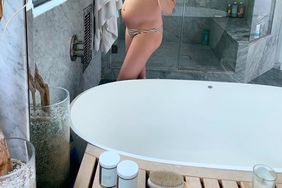 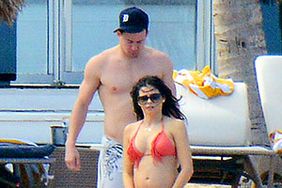 Jenna Dewan-Tatum Shows Off Her Baby Bump in a Bikini