“I’m getting ready to have my baby, so I can’t go anywhere, I can’t do anything,” Burke told PEOPLE at the Los Angeles Ballet’s debut of The Nutcracker in Beverly Hills on Saturday. “I’m just kind of waiting it out – not strictly at home, (but) no skiing and no vacations this year. Just waiting for baby.”

Burke, 35, and Charvet, 34, announced their engagement and pregnancy in August. Burke has two daughters, Neriah and Sierra, with plastic surgeon Garth Fisher, from whom she split in 2005.

“I’m just trying to maintain my lifestyle, and to stay healthy and exercise and kind of embrace the time,” Burke says. “It’s not the most glamorous time for a woman. But right now, it’s much better than it used to be. I think there’s a lot of great fashion for pregnant women now. It’s a beautiful time because you can really feel good in your skin during your pregnancy.”

Burke’s preparation for her third child’s birth is “not really” different from the others,” she says. “I had a really good pregnancy the first two times.”

Burke says she’s “Just working out and trying to eat healthy. (It’s) a little harder the third time, but not bad.”

Charvet won’t be home for long, she also says. “He’s getting ready to go work on a film in Morocco. I’m hoping that the timing is going to work out right for the baby. He’ll be there for a couple months. But he’ll be home for the birth – that’s good.”

As for wedding planning, that’s going slowly, for now. “We’re just going to wait for the baby and not stress ourselves out planning the wedding. Then try to do it as soon as possible,” Burke says. 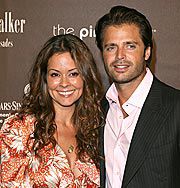 Brooke Burke talks about the importance of pregnancy workouts

Brooke Burke talks about 'being okay with the chaos'

Brooke Burke says baby #4 will be her last