Posh Spice Victoria Adams wed English soccer star David Beckham Sunday, saying “I do” at a 40-minute ceremony in a chapel within the grounds of Luttrellstown Castle, outside Dublin, Ireland. David, 24, was dressed in an ivory suit by Antonio Berardi and held onto their 4-month-old son Brooklyn (who was dressed in his own designer suit). Victoria, 25, arrived for the ceremony in a Bentley, resplendent in an off the shoulder gown designed by Vera Wang that had a 20-foot train. Underneath she wore a corset by Mr. Pearl which gave her an 18-inch waist. Her head was topped with an 18-carat golden crown by Slim Barrett, who was also Princess Diana’s jeweler. Elton John and George Michael were to have been among the 250 guests, but they were not spotted in the crowd. 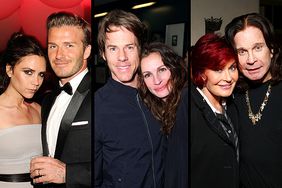 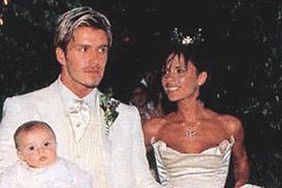