Victoria Beckham admits she’s not the most talented singer or dancer in the world – but she’s got enough to be a star, and is thrilled she can show off for her kids on the current Spice Girls reunion tour.

“It became very obvious from the start [of my career] that I was never going to be the best singer or the best dancer or the best actress,” Beckham, aka Posh Spice, tells Elle in its January issue. “I was never a ‘natural.’ You know, I’ve never been that good at anything, to be completely honest.”

That didn’t stop her from attempting “Mein Herr” from Cabaret during her original Spice Girls audition. “I’m no Mariah Carey, but I can sing,” she says.

Now, a decade later, and with three kids of her own – Brooklyn, 8, Romeo, 5, and Cruz, 2, with husband David – Beckham says she’s thrilled to be touring as a Spice Mom.

“I wanted my children to see that Mummy was a pop star,” she says. “It was the last opportunity for them to stand in a crowd full of people screaming for the Spice Girls.”

The family has settled in well in Southern California, she adds – for which she credits the laid-back vibe.

“Going to school here, the kids are much happier. Their confidence level has gone through the roof,” she says. “I’m very proud to be British, but here it’s a lot more relaxed. It’s the happiest as a family that we’ve ever been. I just love America.” 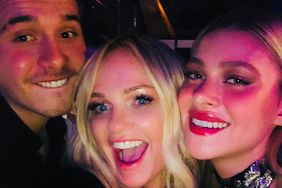