Pope John Paul II, the spiritual leader of the world’s 1 billion Roman Catholics, died on Saturday night in Rome, the Vatican announced. He was 84.

“The Holy Father is deceased this evening at 9:37 in his private apartment,” papal spokesman Joaquin Navarro-Valls said in a statement. “Our beloved Holy Father John Paul II has returned to his home. Let us pray for him.”

A Mass will be held in St. Peter’s Square Sunday morning, according to reports.

The Holy Father had led the church for 26 years. In his radio speech on Saturday, President Bush called the Pope “a faithful servant of God and a champion of human dignity and freedom. … He is an inspiration to us all.”

Since Thursday, as the Pope’s condition worsened, the mood in St. Peter’s Square in Rome had been mournful, with both Italians and pilgrims from far distances falling to their knees and weeping. Tens of thousands of worshipers had gathered there, as million of others around the world prepared for the pope’s passing in church masses and prayer vigils.

At a Saturday morning press update, it was announced that the pope, though his words were barely audible and his breathing labored, had managed to say to those around him: “You come to me, and for this I thank you.”

The pope’s death came two weeks after his release from Rome’s Gemelli hospital, where he had undergone surgery to have a breathing tube inserted in his throat after suffering larynx spasms.

As the Vatican announced on Friday, the Holy Father was suffering from a “urinary tract infection, septic shock and a cardio-circulatory collapse.” (Septic shock affects the body’s immune system, causing widespread inflammation and blood clots that hamper blood flow and the functions of the heart, lungs and kidneys.)

The pontiff had asked that he not be taken back to the hospital so that he could die in his own bed overlooking Vatican Square, and he was said to be mentally alert as his physical system broke down. It was also said that he declined painkillers.

On Friday, he had received the blessing for the dying after suffering heart failure and developing a high fever. That same day, the world’s cardinals, who are responsible for selecting a successor, had been summoned to Rome.

According to the rules of the church, their secretive election procedure must begin within three weeks of the pope’s passing.

Despite his long illness, the Pope, who was the third-longest serving pontiff in history, remained committed to continuing his work even through his final weeks. In his weekly address on Feb. 20, he said the call to “look after the flock” was “particularly alive” in him.

“Also in this hospital, in the middle of other sick people to whom my affectionate thoughts go out, I can continue to serve the church and the entire humanity,” he said from Gemelli hospital.

The first non-Italian Pope in nearly five centuries and the first ever from Poland, he is considered by many to have been the most important leader of our time. As the often clandestine organizer of the nonviolent mass movement that freed Poland from Communist rule, John Paul II is credited with playing a major role in events that led to the fall of Soviet totalitarianism and the end of the Cold War.

“He’ll go down in history as the greatest of our modern Popes,” the Rev. Billy Graham once told Time magazine. “He’s been the strong conscience of the whole Christian world.”

From the first days of his reign in 1978, it was clear that John Paul II, born Karol Jozef Wojtyla in Wadowice, a small city 50 kilometers from Krakow, Poland, relished contact with his followers. The first pope ever to give a press conference, he would often extend impromptu breakfast invitations to officials visiting the Vatican. He shifted easily among seven languages and set out almost immediately on a series of travels that would eventually bring him to nearly every country during more than 100 trips. “This pope was revolutionary, because he didn’t say, ‘You have to learn my language,'” Jesuit theologian Rev. John Navone once told The New York Times. “He said, ‘I’ll learn your language.'”

Despite his global reach, John Paul, the second of two sons to Emilia, who died in 1929, and Karol Wojtyla, a non-commissioned army officer who died in 1941, was even more notable for his personal touch – the warmth of his personality and his uncanny ability to connect with individuals, from the stream of Presidents and prime ministers he met to churchgoers at parish churches to the young children he would embrace like a politician on the hustings.

He also displayed great fortitude. Though seriously wounded, John Paul survived a May 1981 assassination attempt by Turkish gunman Mehmet Ali Agca, who tried to kill him during a visit to St. Peter’s Square in Rome. He later formally forgave him.

As a schoolboy he was an excellent soccer goalie, a good storyteller, a graceful dancer, and a warmhearted friend who never got into quarrels. As a university student in Krakow, Wojtyla’s favorite activities included hiking, skiing, and performing in a repertory theater group. But the German invasion of Poland in September 1939 solidified his decision to become a priest.

“Faced with the spreading evil and the atrocities of the war,” the Pope later wrote in his memoir Gift and Mystery, “the sense of the priesthood and its mission in the world became ever more clear to me.”

Wojtyla joined an underground subversive organization and became a religious activist while studying secretly for the priesthood. He was ordained on Nov. 1, 1946, and, in 1963, was promoted to the position of Archbishop of Krakow.

“Karol Wojtyla, as bishop of Krakow, forged the Solidarity revolution,” biographer Jonathan Kwitny wrote in his 1997 book Man of the Century, “in his philosophy classes, his community synods, his secret ordination of covert priests, his clandestine communication seminars, the smuggling network he oversaw throughout the Eastern Bloc, and above all by his example.”

When he assumed the papal throne in 1978, the 58-year-old Polish priest quickly settled into his new job. Convinced that the Catholic Church needed to avail itself of modern communications to maintain the faith, he undertook more than 80 overseas trips and visited 119 countries during his papacy, preaching against what he perceived to be the materialism, selfishness and social injustices of capitalism and Western society.

His teachings – which included an uncompromising stance against abortion, birth control, the use of condoms, the ordination of women and (in the Latin rite) of married men – alienated many Catholics and divided the Church, yet he is credited with clarifying Catholic doctrine (through a new Catechism of the Catholic Church), with reaching out to recognize other faiths and with serving as a moral compass for believers and non-believers alike.

A man of unusual physical energy whose routine included 17-hour workdays, Pope John Paul continued his grueling schedule throughout his papacy, though in his last years, he showed the increasing effects of Parkinson’s disease – his walk slowed to a shuffle, his speech slurred and his muscles were unsteady. He refused to retire from the public eye – “Who would I give my letter of resignation to?” he joked, intent on leading Christians into the future with a new plan for repentance and salvation.

Pope Near Death as Millions Pray 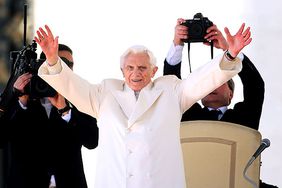 Agostino Cardinal Casaroli, the Vatican's 'divine Diplomat,' Fills in for His Patron Pope 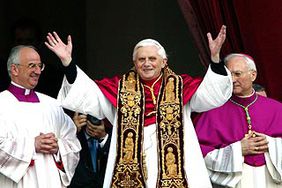 A Poet, Actor, Athlete and Freedom Fighter Ascends the Throne of St. Peter