Newly recovered from the flu, Pope John Paul II this week asked the faithful to pray for him so he could keep carrying out his duties as he starts the third decade of his papacy. John Paul spoke to Rome’s cardinals in his annual state-of-the-church address. Although it focused mainly on the work of this past year, the speech came in the run-up to the 2000 Jubilee Year that will be a major event in his papacy. “I ask all to continue to pray so I can serve the Lord each day with renewed love,” John Paul, 78, said. It was one of the Pope’s first appearances after a flu last week that sent his temperature to 100 degrees, forcing him to cancel some appointments. 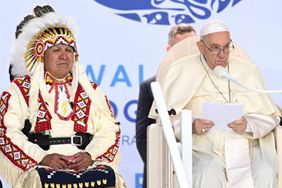 Benedict XVI Gets Down to Business as Pope

Agostino Cardinal Casaroli, the Vatican's 'divine Diplomat,' Fills in for His Patron Pope