'Playboy' Claims Jack Nicholson, Warren Beatty and James Caan Had Secret Underground Tunnels from Their Homes to the Playboy Mansion

"If you (or your dad or someone you know) saw or used one of these celebrity tunnels, please email us at editors@playboy.com"

Here are some fun bits of trivia about the Playboy Mansion: It’s the only private residence in L.A. with a fireworks license and one of the only with a zookeeping license. It may also have had secret underground tunnels connecting it to the homes of some of the biggest stars of the 1970s.

According to an article on the magazine’s website, one of Playboy‘s editors was pulling photos for a project and discovered a trove of Polaroids from 1977 that seem to show a large excavation project. “We asked the new general manager about these photos,” they write, and “he said, very matter-of-factly, ‘that’s probably when they built the tunnels in the ’70s.’ ”

Further photos apparently show a collection of blueprints detailing, yes, a series of underground tunnels that connected the mansion to other homes in the area, including those of “Mr. J. Nicholson,” “Mr. W. Beatty,” “Mr. K. Douglas” and “Mr. J. Caan.” Sound like anyone you know?

One staff member purportedly told the intrepid writers – off the record – that “I heard [the tunnels] were closed up sometime in 1989.” A request to the mansion manager yielded no further information, nor did calls to the actors named above.

While the Internet geeks out over these pictures, it’s worth noting Wednesday’s date (April Fool’s Day).

“If you were at The Playboy Mansion in the 1970s or 1980s,” the article concludes, “and you (or your dad or someone you know) saw or used one of these celebrity tunnels, please email us at editors@playboy.com.”

Holly Madison to Release Memoir Down the Rabbit Hole: Curious Adventures and Cautionary Tales of a Former Playboy Bunny in June 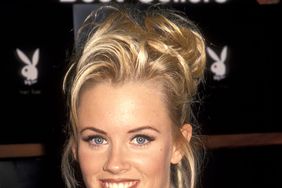