Long after the evening's final award, stars continue the celebration at the night's most exclusive bashes!

His Atlantic City mobster drama didn't take home any acting accolades, but Piazza (in Alexander McQueen) gets his own reward – in the form of a kiss! – from new girlfriend Simpson. "We are really enjoying each others' company," he told PEOPLE at the HBO party.

The night's winningest on-screen couple hit the HBO post-award reception à deux. "I wanted to wear whatever would make me stand up the straightest!" Bowen quipped to PEOPLE of her Oscar de la Renta gown.

What cameras? The so-in-love couple steal a glance at HBO's after-party, hosted at The Plaza at the Pacific Design Center in L.A.

After Piven joked that HBO is "also known as the Mark Wahlberg channel," the two hug it out at the HBO soiree.

The Glee costars take a moment from the madness to reconnect – and mug for the cameras! – at the see-and-be-seen HBO fete.

He may have lost to FNL's Kyle Chandler, but Hamm – flanked by his gal pal and last year's best supporting actor, Paul – seems more dapper than depressed at HBO's post-party!

Her va-va-voom Vera may have stopped the presses, but beau Loeb embraces the calm with an intimate nuzzle at the HBO bash.

The Good Wife costars share a cocktail-enhanced cuddle at the HBO event after she walked away with the award for outstanding lead actress.

It seems these True Blood costars are true blue! Trammell joins couple Moyer and Paquin for some animated, hands-on conversation at HBO's blowout.

The belle of the ball, who took home an Emmy for her role on Mike & Molly, shows that the best plus-one is a gilded statuette while holding court at the Governor's Ball.

The perpetually funny twosome showed off their polished looks at HBO's official after-party.

Hot couple alert! The Conan the Barbarian and Game of Thrones hunk stays close to his longtime love Bonet at the HBO event.

Boardwalk Empire star and Emmy nominee Buscemi gets a hug from old friend Tucci while partying at HBO's post-Emmys bash.

Who says you can't be goofy? Emmy-winning Game of Thrones actor Dinklage plays around with actor Joey Kern at the HBO after-party.

Screen legend Voight takes time off from grandpa duty to hang out with siren de la Huerta and The Good Wife's Noth at HBO's posh party.

The Dexter actress celebrates her Emmy nomination in a killer gown with Green Hornet actor Harbour at HBO's Emmy after-party.

Who knew the silver fox had a soft side? The Mad Men actor and Emmy nominee spends time with his wife, Talia Balsam (George Clooney's ex), and son Harry at the AMC After Party at L.A.'s Mr. C.

The Big Bang Theory beauty gushes over her costar's Emmy victory at the post-show Governor's Ball.

The host with the most, who kept the show going with funny zingers and chic dresses, stays close to wife Dr. Lara Embry at the Governor's Ball soiree.

Mega-comediennes and pageant participants Fey and Poehler celebrate their nominations at the Governor's Ball. "I think we were all just genuinely happy to be in the category together," Poehler told PEOPLE about her nom.

Eighty-nine and fabulous! The Hot in Cleveland actress and Emmy nominee parties down at the Governor's Ball.

The showstopping Vampire Diaries star mingles with pal Valderrama at the Governor's Ball.

The redheaded bombshell takes time out at the Governor's Ball to share a sweet moment with husband – and supportive funnyman! – Geoffrey Arend.

The off-duty Angels happily embrace each other at the Governor's Ball soiree.

The longtime friends and comedy hosts celebrate Stewart's win in style at the Governor's Ball.

The colorful Children's Hospital star poses with the elegant English actress at the Governor's Ball.

Adding megawatt smiles and sparkles to the hullabaloo, a golden Ramirez and red-hot Washington are picture perfect at HBO.

Looks like that extra bit of luck from Xander Dane Jones helped! The Mad Men costars share a laugh with producer Matthew Weiner over the show's outstanding drama series win at the AMC party.

Look at those swoon-worthy smiles! The True Blood hunk keeps the good times rolling with Grace at HBO's party.

Style magnet Michele and her costars have a Glee-ful time at FOX's Emmys bash at Fig amp Olive.

Do you see a Family resemblance? The curvaceous Latina actress spends time at FOX's party with on-screen niece Winter. 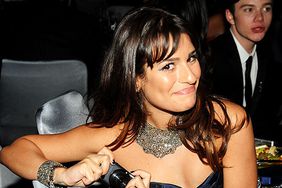 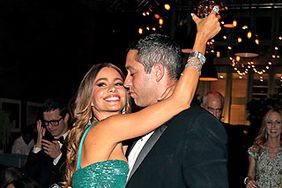 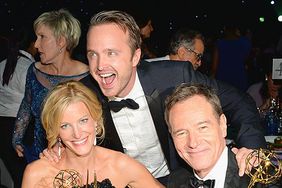