Keeping her plans a secret, Jennifer Lopez gave hubby Marc Anthony a birthday to remember: a surprise bash Sept. 14 at New York's Bowery Hotel, just hours after she competed in a triathlon in Malibu. "I can't believe we pulled it off," Lopez told

PEOPLE of the 1940s Cuban nightclub-themed party, which featured showgirls modeled after

And Anthony never suspected a thing. In fact, Lopez had told her husband they

were flying to New York to dine with pal Katie Holmes. "My favorite moment

was as we walked in," Lopez said. "Marc was in shock. It made my knees go

Lopez and Anthony try their luck at the tables. Also on tap for the night: Entertainment by burlesque dancer Dita Von Teese and a salsa orchestra. "She wanted a sexy vibe with the casino and showgirls," party planner Liberty Woodman said.

featured the guest of honor's mug on the bill.

After blowing out his birthday candles, Anthony had a few words for his mojito-sipping guests, "I'm 40 years old. Let the music roll!" And he gave a hand to his wife, telling Lopez, "You are the cutest thing!"

"My Man" for an audience that included pals Brooke Shields and Leah Remini.

If the morning's triathlon wore Lopez out, she didn't show it. The singer-actress hit the dancefloor in her Marchesa dress. "I didn't feel horrible," she said. "Just a little tired. I had a little headache, maybe it was the relief of the stress."

The perfect ending to a perfect night? A kiss, of course! And a European getaway with their twins, Max and Emme. "After I sang, I told him we were leaving for Italy and Greece," Lopez said. "We got on the plane around 4 a.m. [and] we talked about how we pulled it off." 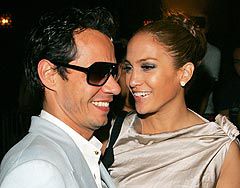