PEOPLE Takes You on the Set of 'Fuller House' : John Stamos Says, 'We Never Stopped Loving Each Other'

Only PEOPLE attended the live taping of the Fuller House premiere episode, and chatted with the cast about their extraordinary friendships

Full House stars! PEOPLE takes you to the set of Fuller House – and catches up with its beloved cast. Subscribe now for the exclusive interview (and find out why the Olsens skipped the spinoff), only in PEOPLE!

It’s been more than 20 years since the cast of Full House were together in the Tanner family kitchen set. And it’s as if they never left.

“We never stopped loving each other,” John Stamos tells PEOPLE on the set of the upcoming Netflix spinoff Fuller House. “That magic you saw? It’s still there because it never stopped from the day that we ended the show.”

On the recreated set, a slightly modernized version of the San Francisco family home, the cast – all real-life friends – laugh and joke in between takes. “I’ve never seen a cast bond like this,” says show creator Jeff Franklin. “It feels like a real family.”

The original Full House aired from 1987 95, but has remained on the air in syndication ever since. The new spin-off follows D.J. (Candace Cameron Bure) raising her three sons with the help of her sister Stephanie (Jodie Sweetin) and best friend Kimmy (Andrea Barber). But in the first episode (and sprinkled throughout the season), Danny (Bob Saget), Joey (Dave Coulier), Uncle Jesse (Stamos) and Aunt Becky (Lori Loughlin) all come back to play.

“It’s surreal being back,” Coulier tells PEOPLE of taping the premiere episode in which the original cast reunites – minus Mary-Kate and Ashley Olsen, who played Michelle.

“It’s like moving out of your house when you’re a kid and then you move back in. It shouldn’t be this much fun.” 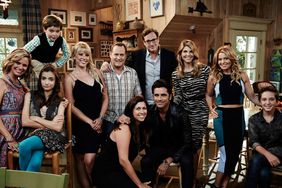 PEOPLE's 'Fuller House' Set Diary: Inside the Taping of the Premiere Episode