PEOPLE Faves: The Best of Summer '09!

From Channing & Jenna's fantasy wedding to J.Lo & Marc's Capri sun, look back at our 10 favorite star snapshots of the season!

You may kiss the princess bride! Channing Tatum and Jenna Dewan said their "I dos" on July 11 at an oceanside estate in front of 220 friends and family members. The couple's whimsical wedding featured a fantasy-fairy theme, with winged flower girls, a castle-shaped cake and crystal keepsakes for the guests.

BEST DAY AT THE BEACH

When you're Matthew McConaughey, any day is a good day to hit the beach! The actor – with pregnant girlfriend Camila Alves and son Levi, 1, in tow – was almost a daily fixture on Malibu's shores, hanging with the family, working out or just simply enjoying the ocean breeze.

Nothing says summer like a fresh-from-the-grill hot dog served up on a toasted bun. While America Ferrera isn't exactly edible, she definitely dressed the part while filming Ugly Betty in New York City on Aug. 25.

Sun, surf and the romantic backdrop of Capri – it all adds up to the perfect getaway for Jennifer Lopez and Marc Anthony, who joined designers Domenico Dolce and Stefano Gabbana for a relaxing day at sea during their Italian vacation in August.

And you thought Macy's Fourth of July fireworks display was something to behold! It's hard to focus on her "Poker Face" when Lady Gaga literally lit up the stage at the MuchMusic Video Awards in Toronto this June with a fiery performance.

Case 39 costars Renée Zellweger and Bradley Cooper took their off-screen romance global this summer – even sharing a cozy trip to Barcelona in August. What makes them work? "They get along really well and just kinda click," a source told PEOPLE.

Good pals Owen Wilson and Woody Harrelson aren't afraid to get this close during a high-spirited wrestling match at sea while vacationing in Portofino, Italy, in July.

Kim Kardashian indulged her sweet tooth with ice cream, lollipops and soda all summer long, but the bikini-ready reality star took a bite out of the tastiest treat of the season at a Fourth of July barbecue in Malibu: watermelon!

Go, Tyra! The talk show host happily flaunted her figure in the middle of New York's Union Square last month. Why the revealing statement? Banks was preparing for the season premiere of her show (airing Sept. 8), where she'll also go weave free.

They've gotten to first base! Kate Hudson has been cheering on beau Alex Rodriguez and the New York Yankees from the stands all summer, but on July 25 the two were finally snapped smooching publicly at the Yankees Family Day Picnic in the Big Apple. 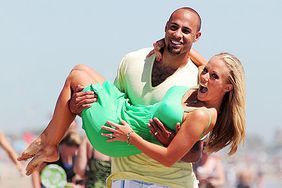