'One Day at a Time' Star Pat Harrington Jr. Dies at 86

Actor Pat Harrington Jr. died Wednesday at in Los Angeles after a battle with Alzheimer’s disease, his daughter Tresa announced. He was 86.

“Dear Friends, it is with the most unimaginable pain and sadness, that I tell you my father, Pat Harrington, Jr. passed away at 11:09 PM this evening,” Tresa wrote in a Facebook post. “We were all with him today and tonight: crying, laughing and loving him. This is the single most heart wrenching and physically painful thing, I’ve ever had to endure.”

Harrington was hospitalized after a fall in November, when his daughter posted an update on his health, saying he was deteriorating.

The actor served at home as a first lieutenant in the Air Force during the Korean War and later worked selling advertising time for NBC when he was scouted for on-screen work on Jack Paar Show, on which he began appearing in 1958.

But he is best remembered for his role on the sitcom One Day at a Time, in which he played superintendent Dwayne Schneider from 1975–1984. The CBS series centered on a divorced mother (Bonnie Franklin) raising two teen daughters, played by Mackenzie Phillips and Valerie Bertinelli. It earned Schneider a Golden Globe in 1981 and an Emmy in 1984.

In 1982, he spoke to PEOPLE about how much he enjoyed being a father to children Patrick, Michael, Terry and Tresa with first wife Marjorie.

“I’m absolutely entertained by the role I have with my kids,” he said. “I never spared the rod, but I’ve never had great cause to use it.”

In recent years Harrington had small roles on Hot in Cleveland (2012) and Curb Your Enthusiasm (2005).

“I know many of you have lost parents and loved ones, and now I know what it’s like to feel the kind of sadness and void that will never be filled but only softened with the passing of time,” his daughter wrote in her Facebook post announcing his death. “My heart is broken to pieces and I will cry and cry until I just won’t. Love to you all! And as we head into this year, never be afraid to tell the people you love, that you love them.” 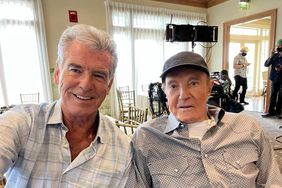