Paris Jackson is a force with which to be reckoned.

The late King of Pop’s daughter, much like her famous father, led a private life up until recently. While Paris has slowly been making her way into the spotlight, it wasn’t until this year that the 19-year-old began seriously dabbling in an array of interests, from acting to modeling, as well as offering up revealing anecdotes about her life in her recent interview with Rolling Stone.

We’re taking a look back at what the star has accomplished in 2017 — so far.

She made her adult red carpet debut: Jan. 9

Paris was stunning as ever in a Tadashi Shoji gown at the InStyle Golden Globes After Party.

She posed for a fashion magazine spread in Paris: Jan. 19

Paris made her front row cameo wearing an “I Feel Love” Givenchy sweater at the Givenchy show, where she bonded with fashion icon Carine Roitfeld.

She landed a guest spot on Star: Jan. 30
Supermodel Naomi Campbell, who is set to guest star on the show, revealed her thoughts on Paris’s acting stint on Star. “I just feel in my gut that she’s going to be an incredible actress,” Campbell told PEOPLE Now.

Paris underwent a quick outfit change from her Balmain jumpsuit to a Jeremy Scott gown for the actual show, where she introduced The Weeknd’s performance.

She’s making music: Feb. 21
But don’t expect Paris to drop an album anytime soon. “I write music for myself,” she told director Lee Daniels in the cover story for Carine Roitfeld’s CR Fashion Book Issue 10. “I use it as a way to get stuff out. It’s not something I see myself following career-wise. There are so many amazing artists in my family. If I were to do it as a career, it would change how I feel about music and I don’t want that to happen,” she added.

She signed with a major modeling agency: March 3

The 18-year-old officially signed with IMG Models, and kicked off her modeling career with a coveted spread in CR Fashion Book.

She played Egg Russian Roulette on The Tonight Show: March 20

You know you’re having a good start to the year when Jimmy Fallon invites you onto his show to play one of his many games. During her late-night appearance, Paris also revealed she was a big High School Musical fan.

She is officially a part of Kendall Jenner’s squad: March 28

The pair met up at an L.A. flea market, where they were spotted chatting together. It’s only a matter of time before Paris gets to meet the rest of her fellow model’s crew.

She showed off her killer style at the GLAAD Awards: April 1

The model — who presented the award for outstanding comedy series at the ceremony — wore a sheer peacock-inspired frock, featuring colorful embellishments that strategically covered her top.

She made her Met Gala debut: May 1

The daughter of the late King of Pop attended as a guest of Calvin Klein and designer Raf Simons in a simple black tea-length dress with a cutout at the waist by Calvin Klein by Appointment. Her stylist Karla Welch called the dress “a very different and modern look for Paris. This is a Raf look all the way,” she told PeopleStyle.

On top of her stylish statement, Paris also made an appearance in Kylie Jenner’s epic bathroom mirror selfie at the event.

She’s set to make her feature film debut: May 2

In case you needed more proof that Paris is taking over the entertainment world: the 19-year-old model is now prepping to appear alongside Charlize Theron, David Oyelowo and Amanda Seyfried in Amazon Studios’ dark comedy, Untitled Nash Edgerton Project.

She made a sartorial statement at the 2017 MTV Movie & TV Awards: May 7

Paris may have turned heads in a stunning Calvin Klein design at the Met Gala, but the budding model chose a more low-key outfit while attending the MTV Movie & TV Awards. She paid homage to former First Lady Michelle Obama in a “Michelle My Belle” distressed T-shirt, worn with ripped boyfriend jeans, a flannel tied around her waist and black Converse that appeared to be very worn-in.

She fronted the July issue of Vogue Australia: June 18

Paris bared her midriff and numerous tattoos in an embroidered bandeau that matches her pool blue eyes for the fashion magazine’s July issue, on newsstands June 26. “One of the first interviews where my words haven’t been twisted, and they get all the info straight from the source!” the model-actress wrote on Instagram, captioning a photo of her magazine cover. “So thankful.”

Paris filmed her scenes for the track off the band’s I See You album, starring alongside Millie Bobby Brown in the 7-minute video. 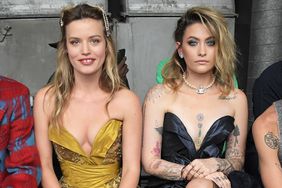