Paris Hilton Swears Off Sex for a Year

"I'll kiss, but nothing else," the Simple Life star has decided

Paris Hilton, who has been linked to a string of rich and famous men, wants to set the record straight about her sexy image.

“People think I sleep with everyone, but I’m not like that,” the Simple Life star and hotel heiress tells British GQ in its September issue. “Kissing is all I do.”

For that matter, the star reveals that she’s only ever had sex with two men in her entire life. “The reason so many of my relationships don’t work is guys are like, ‘Hey what’s going on? It’s been like four months and I’m only getting a kiss here,’ ” she says.

When it comes to chastity, says Hilton, “I feel good about it. I like the way guys go crazy when they can’t have sex with you.”

Expanding upon that philosophy, she theorizes, “If he can’t have you, he stays interested, the moment he has you he’s gone. Unless he is really in love with you.”

As for the subject of guys, specifically the ones who have been in her life, Hilton says of her first love, Jason Shaw: “He’s amazing. We are very close and he lives next door to me.”

Of former fianc Paris Latsis: “I won’t get back with him.”

Hilton also says that she thinks she’ll only be married once, and when it comes to going out on a date, she likes to be treated “like a princess.”

Paris Hilton: My Album's So Good, 'I Cry' 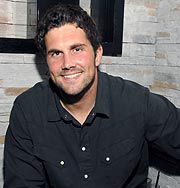 Paris Hilton: I Want a Family