PAMELA TALKS FOR THE ANIMALS

Pamela Anderson Lee is speaking out against traveling animal exhibitions. A member of People for the Ethical Treatment of Animals, the former “Baywatch” star became angry after television personality Jack Hanna asked her twice to pose with animals on display at a New Orleans TV convention last week, the Associated Press reported. Anderson was at the convention to promote her syndicated show “VIP.” In a Jan. 27 letter to the National Association of Television Program Executives, she urged the organization to ban traveling animal acts in the future. “Their constant confinement and handling is both physically and psychologically harmful. I refuse to be a party to their suffering.” 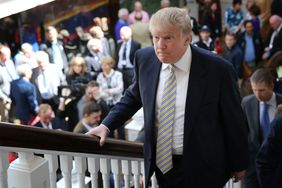 Donald Trump Banned from Future Re-Admission to SAG-AFTRA: It's 'More Than a Symbolic Step'