The former Baywatch star ties the knot for the third time

Pamela Anderson has said “I do” for the third time to longtime pal Rick Salomon.

The pair tied the knot Saturday night in Las Vegas at the Mirage Hotel before Anderson’s children and members of her family, sources confirm to PEOPLE.

A conventional marriage it wasn’t, as the nuptials actually took place in an hour-and-a-half between Anderson’s two magic shows.

After the nuptials, it was right back to work for Anderson, who made no secret that she had just gotten married. “Hello, I just got married I did,” Anderson said after performing in the second magic show of the night. “I’m distracted. It’s a big day. A big day at the office.”

Anderson has had two high-profile marriages – to ex-husbands Tommy Lee and Kid Rock, who famously fought at this year’s MTV Video Music Awards. Salomon, 38, is divorced from actress Shannen Doherty.

Lee and Salomon made their matrimonial intentions known when they applied for a marriage license last month in Las Vegas, where Anderson has been performing with magician Hans Klok at the Planet Hollywood Resort & Casino.

So why a third walk down the aisle for Anderson? Says a source, “They are head over heels in love. They are really close. They have a relationship already and they have the license.”

“Rick is always with her,” another source has told PEOPLE. “He’s backstage when she does her show all the time.”

On her blog, Anderson called Salomon a friend of 15 years. And they do have at least one scandalous tie – both have appeared in sex tapes: Salomon with Paris Hilton, and Anderson with Lee.

Last month, Anderson, appearing on Ellen DeGeneres’s show, revealed that she was dating a new mystery man. “I paid off a poker debt with sexual favors, and I fell in love,” Anderson told DeGeneres of her new guy. “It’s so romantic. It’s romance.”

And Salomon gets a thumbs-up from at least one guy in Anderson’s life: magician Klok, who told PEOPLE recently, “I like Rick. He’s a really nice guy. As long as he’s not making another video, I’m ok with him.” 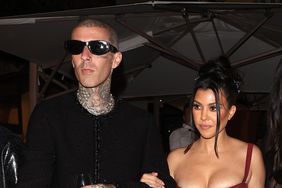