Pamela Anderson has chimed in on the controversy that has surrounded her Blonde and Blonder costar Denise Richards on their Vancouver movie location.

“Can’t believe set is surrounded by loser paparazzi – not Canadian – all American and European…Leave us alone!!!” the former Baywatch babe and recent bride (to Kid Rock) posts on her official Web site. “They are being super idiots!!! Yelling rude stuff. They need to really go home! What is the big deal? All these big hairy men attacking us girls. A-holes!!!”

For her part, Richards says she made a big mistake when she tossed a photographer’s laptop computer off a balcony . The actress will not face criminal charges over the incident.

“I am not justifying my behavior. It was wrong,” Richards tells Access Hollywood in an interview to air Monday. “I saw one of the photographers, went up to him and offered to give him a few nice shots and asked him to please leave so we can focus on our scene. He wouldn’t and he got really belligerent and he was saying vulgar, nasty things to me and made a derogatory remark about my family. I just did what I did and I feel terrible.”

Providing background on what possibly provoked Richards, Anderson writes: “Paparazzi were shouting out ‘no wonder you can’t keep a relationship together’ to Denise. Denise walked up to them. They threatened her and something happened.”

Adds Anderson: “Normally I don’t care but I feel protective of Denise – I can relate. If it were me I would’ve thrown the photographers over the edge – they got lucky.”

Pamela Anderson Skips Cannes to Be With Kids 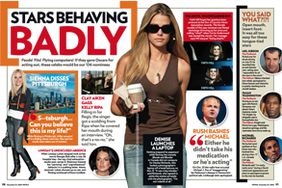 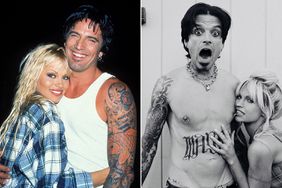 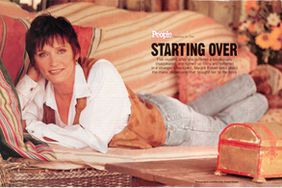