The couple make it legal in a top-secret Beverly Hills ceremony, says a source

Pamela Anderson and Kid Rock got married although not when Anderson said they did.

On Aug. 2, Anderson posted this message on her Web site: “Just Married! It’s official. Just left the courthouse!!!! Mr. and Mrs. Ritchie have left the building.” However, a source tells PEOPLE that Anderson and Rock (real name: Robert Ritchie) in fact wed the next day in California.

According to the source, Anderson, 39, and Ritchie, 35, quietly made their union legal at the Beverly Hills Courthouse on Thursday morning. The only guest at the top-secret ceremony was a friend who served as witness. Anderson’s sons with ex-husband Tommy Lee, Brandon, 10, and Dylan, 8, did not attend.

The ceremony took place at the courthouse’s on-site wedding chapel, which features two rows of white-linen covered chairs before an altar area – a white podium beneath a synthetic ivy-covered trellis. The walls of the room are swathed in white gauze, with a few strings of white Christmas lights lining the ceiling’s perimeter.

The wedding was the couple’s second ceremony. Last weekend in Saint-Tropez, they held an elaborate wedding aboard a yacht, but the marriage was not considered legal under French law because in that country couples must first have a civil wedding at the mayor’s office.

The second ceremony comes as no surprise: During a July 26 press conference in Las Vegas, Anderson repeatedly declared her intentions to marry her rocker beau – serial-style.

UPDATE: On Aug. 9, Anderson added a new post to her Web site admitting that she did, in fact, wed in California. In an entry titled “The facts …” she writes, “We got married on August 3rd in a Beverly Hills court house before we left to honeymoon in Detroit! But our real wedding was July 29th in France. We’re having the best time. Looking forward to more ceremonies …”
• Reporting by MICHAEL FLEEMAN 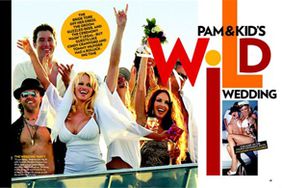