From her political allies to her Hollywood pals, meet Oprah's tight-knit inner circle

There are Oprah's Favorite Things, and then there are Oprah's favorite people. Among them: Julia Roberts, who has visited the Oprah show an astounding 22 times, beginning in 1989 for Steel Magnolias. In May 2011, Roberts returned for the final time with her Larry Crowne costar Tom Hanks to bid farewell to the talk-show host. "It's like sitting down at the kitchen table with friends," Oprah said of the experience.

After a lifetime of dieting, Oprah met the personal trainer in 1992, when she was at her all-time heaviest – 237 lbs. Since then, Greene has been there for her weight-loss triumphs (showing off her toned, 160-lb. body on the cover of O in 2005) and her setbacks (gaining 40 lbs. four years later). His reward: The media tycoon threw Greene a lavish, black-tie wedding at her Montecito, Calif., estate when he married in 2004.

A 15-year veteran of the Oprah show, Salata has gone from the control room to star of Season 25: Oprah Behind the Scenes on the OWN network. Salata told the L.A. Times recently that being Oprah's right-hand woman is the equivalent of winning the lottery. "[She] is my greatest teacher. I am a different human being for having worked with her," says Salata, whose afternoon meetings with the mogul also came with Oprah-packed GladWare lunches. "You don't see that every day from world icons."

HER POLITICAL PALS: THE OBAMAS

She invited the then-junior senator from Chicago to her Legends Ball, hosted fund-raisers for his White House run and had the President and the First Lady on her show as recently as May – all because she knew from watching the 2004 Democratic National Convention that Obama would be Commander in Chief one day and "she would do whatever I could to work for him."

From her big, blown-out '80s do to bangs, a bob, ringlets and braids, Oprah has entrusted her hair to one man: Andre Walker, who has worked with the talk-show queen for 25 years. "That's why I still have my hair," she says. In turn, Oprah has named Walker's hair-care line one of her Favorite Things and let her longtime confidant make over her Santa Barbara, Calif., guesthouse, which she then featured in an issue of O at Home and on her show in 2006.

For 10 years he served as Oprah's personal chef, before leaving to run his Chicago restaurant Table Fifty-Two and D.C. venture Art and Soul. But for all his accolades – he's a two-time James Beard winner, a bestselling cookbook author and successful restaurateur – he's still known as Oprah's chef. "It's amazing, the power of Oprah Winfrey: We made [Table Fifty-Two hummingbird cake] 10 years ago on the show," Smith says."I tell you, at the end of the day, it'll be, 'He made great hummingbird cake and delicious fried chicken.'"

Over the years Oprah has perfected her look, thanks to Hurliman, whose job is to dress the icon three minutes before show time. "I've come to learn that to Oprah, it's just like walking out to any normal job ... there's just more important things to get done in a day," she says. But after six years and countless outfits, Hurliman does have her favorites, like the Celine red suit Oprah wore for the 2004 season premiere show in which she gave away Pontiacs to audience members. "She knew everyone in the audience would be receiving a key ring with a red bow," says Hurliman. "When that picture was shown around the world, of her sitting on top of the car in the red suit, it was brilliant."

"He's kind, and he's supportive, and he's 6 ft. 6 in.!" Oprah once told PEOPLE of her longtime steady, who's been with the Queen of Talk for, yes, 25 years. So what has kept the low-key couple together all these years? "You have to have such a strong personal confidence in order to withstand being with somebody to whom the attention is always directed," the media mogul says of her market consultant/motivational speaker beau. "We have such respect for each other and for each of our paths in the world." 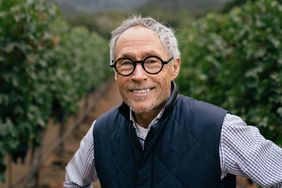 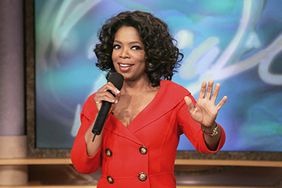 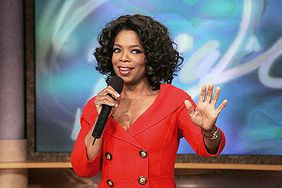 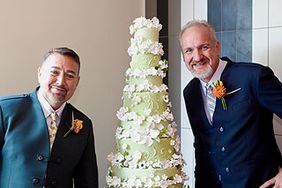