'On the Town' Goes Off

Broadway’s “On the Town,” a revival of the 1944 Leonard Bernstein musical, will close Sunday after a 65-performance run and an estimated $6 million loss. The show was the brainchild of George C. Wolfe, artistic director of the Joseph Papp-New York Shakespeare Festival, one of country’s most prominent nonprofit theaters. (“A Chorus Line” started there.) The group financed the entire Broadway production. “We had hoped that with a television commercial and a direct mail campaign, as well as a number of extremely positive reviews, we would be able to surmount the annual January doldrums on Broadway,” Wolfe said. “This unfortunately was not the case.” 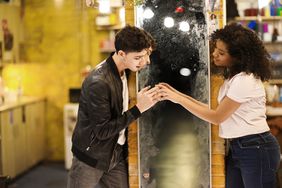 'West Side Story' Broadway REVIEW: A Bold, Boundary-Pushing Revival Where Not Everything Works