She may be one of PEOPLE's Most Beautiful faces now, but that wasn't always the case for Nicole Kidman, 34. During her awkward teenage years, Kidman tells the magazine, it was sister Antonia who got the stares. "We'd walk down the street and people would go, 'Oh Nicole, isn't your sister gorgeous?' " These days, Nicole isn't having any trouble turning heads both onscreen and off. Look back at her stunning transformation through the years.

Kidman, in 1983, says she was "gawky" during her teen years, telling PEOPLE that she was considered the "plain one" next to younger sister Antonia, now 31. "She has brown skin and beautiful brown hair, and I was always sort of the one who needed to have a personality."

No, that's not Kidman dressed in a retro bathing suit. That's her mother, Janelle, holding a 1-year-old Nicole at the beach. (It's obvious where Kidman gets her looks.)

A cherubic-looking Kidman, 2, puts the squeeze on her father, Antony. Of her relationship with her psychologist dad, who's divorced from her mom, Kidman tells PEOPLE that since her own divorce from Cruise, "I'd always been much closer to my mother, and suddenly my father stepped forward and said, 'Lean on me.' "

Though her brilliant red hair is the source of envy to many, Kidman, at 4 1/2, lamented her locks growing up. She told PEOPLE that her hair made her feel "awkward and repulsive. When I was little I had curls down to my bum and people would always pull at my hair and say, 'Ohhh, she's got currrrls!' And I hated that."

Kidman and her costar, Tom Cruise, got revved up about each other on the 1990 set of the car-racing movie Days of Thunder. Screenwriter Robert Towne told PEOPLE that Cruise was instantly smitten: "Tom (was) saying over and over what a knockout she was."

A sleek-haired Kidman – with masked man Val Kilmer – heated up the screen in 1995's Batman Forever, in which she played a reporter who steals Batman's heart.

With her porcelain skin and curly red locks, Kidman never quite fit in in her native Sydney, actress Naomi Watts (Mulholland Drive), a friend of Kidman's since the two were teens, told PEOPLE. "Everyone in Sydney looks like a California beach girl, but Nicole didn't. She looked like someone who belonged in another time."

Kidman was every bit the vampy temptress (working her magic on costar Joaquin Phoenix) in the 1995 movie To Die For, in which she played an ambitious – and murderous – anchorwoman wannabe.

At one time, Kidman and Cruise, cuddling with their adopted children, Isabella and Connor, now 9 and 7, respectively, looked like the perfect family.

Nicole Kidman is the picture of elegance with her upswept 'do and classic cream suit at a press event in Italy in September 2001. Her great sense of style came out even as a youth, sister Antonia told PEOPLE. "She did have some great stuff. She kept her room a bit off-limits to me, but she'd be away and I used to sneak her clothes."

Kidman and Moulin Rouge director Baz Luhrmann celebrate their Golden Globe wins at a post-awards party in January. "She's this really Aussie girl who's full of life and has this loud, honking laugh," Luhrmann told PEOPLE. As for her physical appearance, he said: "You can do a lot with makeup, but you can't create that luminosity." 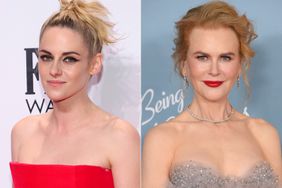 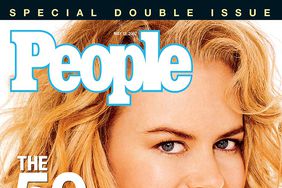 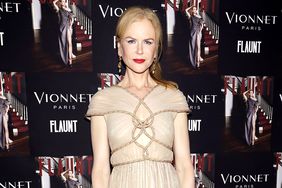 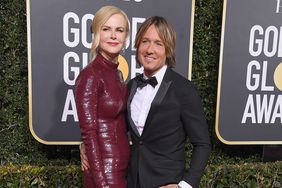 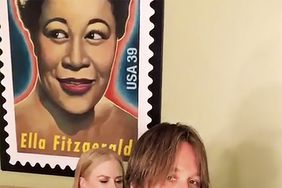 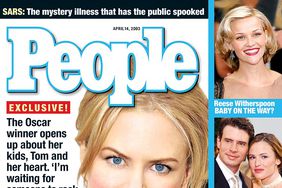