But life is about to get even busier for the 40-year-old: He’s also expecting his second child (a girl!) this winter, hosting VH1’s Big Morning Buzz Live and filming a new docuseries for A&E that follows him and his brother, Drew, as they embark on a lifelong dream of opening a sports bar/lounge in their hometown of Cincinnati.

And now, Lachey is announcing his fourth solo album, Soundtrack of My Life, to be released Nov. 11. The album will feature 10 standout songs from popular movie soundtracks.

“I knew I wanted to do a cover album but wanted to go for a different concept,” Lachey tells PEOPLE exclusively. “Soundtracks just felt like a cool angle on doing a cover record. The marriage of music and film is one that has been talked about so much over the years, and the way music affects you when you’re watching a film is so impactful.”

This album, which Lachey calls more of a “passion project” for him, features songs that have been memorable for him throughout his life.

” ‘Falling Slowly,’ from the movie Once, is a very special song for Vanessa and me. It sort of became our theme song to the point where we had it performed at our wedding shower,” he says about one of his favorites on the album.

“And ‘What a Wonderful World’ is an all-time classic for me and in one of my favorite movies as a kid that I remember watching with my dad, Good Morning Vietnam with Robin Williams. They all have a story behind them and have a special meaning for me.”

With so much on his plate at the same time, Lachey is determined to make it all work. “I wish I could be in multiple places at once,” he admits. “I’m just trying to keep the balance. When I’m invested in one project I give it all I’ve got and then move on to the next. And in between, I try to be the best husband and father I can be.”

As for the cover image of the album, Lachey wanted to keep it simple. “We found an old theater in L.A. and were just going for the classic movie vibe,” he says.

Lachey will return on a new season of Big Morning Buzz Live on Sept. 29 at 9 a.m. And his A&E series, tentatively named Lachey’s Bar, is slated to premiere in 2015.

Nick Lachey: Spending Time with Vanessa Is 'Key' to Our Marriage 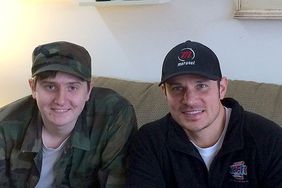